The woes of the Dallas Stars road power play have become a tiresome topic. You were tired of reading about it. We were tired of writing about it. Though it was a very worthy topic of discussion and probably still will be for the remainder of the season, it sure was nice to see something different on Monday when it connected in a very big way, paving the way to two huge points against a division foe.

So as much as we hammer things into the ground when they're not going well, why not break it down into equally tiny pieces when it succeeds, you know, for fun? So here is a look at the beauty of this goal... Get your popcorn ready.

We join the play in progress as the entry is about to happen. Brad Richards had been hung up around the Dallas net (hooked or otherwise illegally impeded, it seemed to him) and gave the puck to Robidas (pictured just behind the red line) who moved it to Steve Ott.

The decision on how to enter the zone falling to Otter, he did what you might expect an Otter to do: He made a no non-sense straight forward move to simply dump the puck in hard, as San Jose had good contain here and were not going to surrender the blue line. 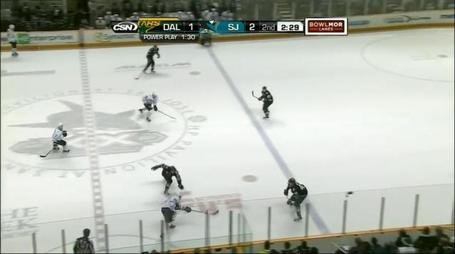 (Here you see Jamie Benn going for a change at the top of the screen. Mike Ribeiro isn't even on the ice yet but will score a goal in seven seconds.)

Entries had been a bit of an issue on some power plays last week on the road and we talked about it on the podcast: Why not just dump it in sometimes? You have extra man. Go get it.

Why James Neal, of course. 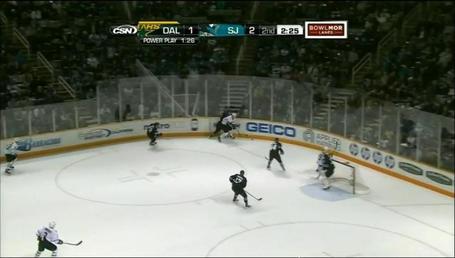 The Shark player gets to the puck first but James Neal actually wrestles it away from him in the far corner. Look at all four Shark penalty killers here and their proximity to the puck. Meanwhile Steve Ott is sneaking down the right wing side out of frame.

Right now Jamie Benn has reached the bench and Mike Ribeiro has come onto the ice but is nowhere near where he will score this goal. 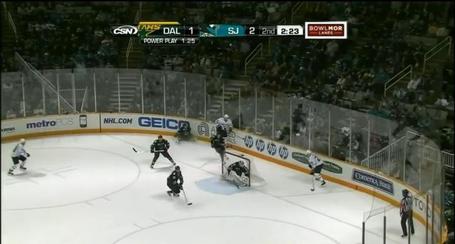 James Neal stole the puck, drawing two Sharks to him (one of whom is now on the ice in the corner) and moved the puck to Ott behind the goal line. Look at the space and time Ott has here. You'd almost prefer that he take it to the crease and plow his way in there, just hoping for something to good to happen, but he spots Robidas open at the point. 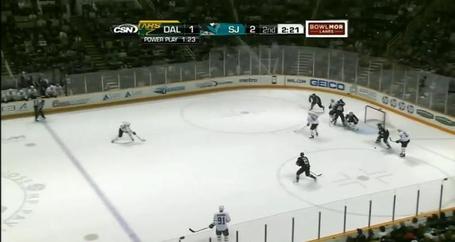 Too often on the power play do the Stars make a good pass and then hold the puck for a second too long. They talk about making quick decisions on the PP all the time but here Robidas does and it pays off. By shooting immediately and taking advantage of the lane he has, he doesn't give San Jose the extra second they need to get into the shooting lanes.

Ribeiro makes a great tip, sure, but the execution here was going to get them a shot on goal regardless and Neal was going to very likely have a rebound opportunity, or else Ribeiro would have been there too (and maybe Ott as well). As Razor says: "the second mouse gets the cheese."

What's the lesson here? I don't know. It's just great execution and beautiful play to watch unfold. They got the PK on it's heals and they scored a goal without letting them get their box set up. The puck moved through the middle of the ice twice. Ever watch the Red Wing power play? They can move it through your box, not around it. (Stop snickering)

By winning a puck battle, getting the opposition out of position and making quick, authoritative decisions with the puck the Stars were able to get the road power play goal they'd been looking for. 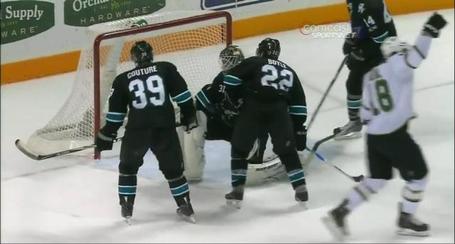 If you want to get really nitty-gritty about it you could call the PP goal they scored at the end of the Phoenix debacle one where the puck was also moved through the middle of the ice. Morrow fired the puck and Eriksson pursued right up the gut... 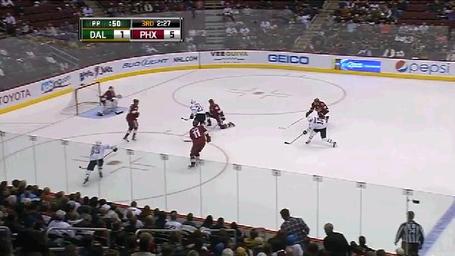 But really it was just a simple "get the puck toward the net" and a lucky kick off the end-boards. Still, both road PP goals came off the rush rather than Brad Richards operating things from the point. Maybe the idea of having Richards playing only half of the PP has some merit to it, but I'm betting Crow still prefers him out there.

The numbers the last two seasons overwhelmingly state the power play only scores if Brad Richards is on the ice. A couple of goals here or there doesn't change that.