It was a bit of a tumultuous week for the Texas Stars with all of the transfers up and down from the NHL, AHL, ECHL, and CHL.  Adding to the chaos was a stretch of five games in six days that began Tuesday and mercifully ended on Sunday afternoon.
Dallas nabbed the Stars' ace goaltender, Richard Bachman, and with Brent Krahn on the mend from a lower body injury, Texas pressed 20 year-old rookie Tyler Beskorowany into service for the road trip.
Stars Light Up Moose 5-2
(HDH blog link)
The Stars ended their seven game home stand with the year's first contest against the Manitoba Moose (Vancouver Canucks). Francis Wathier celebrated his 26th birthday with a goal in the game. The winger, who started the day with the Dallas Stars in Columbus, hoped to finish the day at home with his wife and "a little glass of wine and maybe some cake, hopefully."
Manitoba opened the scoring but Texas roared back in the second getting goals from Francis Wathier, Cody Chupp and Sean Backman. Former Manitoba Moose (Meese?) Raymond Sawada and Greg Rallo tipped in some insurance goals in the third period to make the final score 5-2 for the home team. "With the big road trip coming up, to get two points in regulation was big for us," said rookie Sean Backman, who had a goal and an assist in the game.
Rockford Plasters Texas in Illinois 8-5
(HDH blog link)
Texas headed to Rockford for a game the very next night.  The suddenness of Richard Bachman's call up necessitated an emergency backup, Dave Brown, who was called up from the Quad City Mallards of the CHL.  According to Bachman, the team pretty much left him on the side of the road and had him catch a bus back to Chicago for the Stars game versus the Blackhawks that night.  For Texas, it was on the Rockford to face the Hawks' farm club, the IceHogs.
Perhaps some of the Stars players wish they also could have been left on the side of the road as Texas did not have a good showing in Rockford.  Tyler Beskorowany allowed 7 goals, including 5 in the second period, on 38 shots.  Rebound were the undoing of the rookie in only his 2nd AHL start.
Texas led the game after the 1st period by the mark of 2-0, allowed two goals to tie it, scored two more to make it 4-2 and then gave up that lead as well.  The period ended 5-4 in Rockford's favor, a lead they would not relinquish.
Texas made it close in the final minutes, pulling Beskorowany for the extra attacker with 2 minutes left, but ultimately fell short.  Texas got goals from Tomas Vincour, Luke Gazdic, Dan Spang (2), and Raymond Sawada.  Despite the loss, Mathieu Tousignant was the only plus player at plus-2.
More inside of the rest of the Stars games this week, including a look at the rookie that is taking scoring by storm and two Dallas players on healthy scoring streaks.
Stars Bounce Back To Beat Griffins 4-3
(HDH blog link)
Texas called up Adrien LeMay from the Allen Americans to backup Beskorowany in Bachman's absence for the Stars weekend series and possibly beyond.  Texas previously only had one win in Grand Rapids (Detroit Red Wings) in franchise history.
If you had only seen the first half of the game, you would think Texas was cruising to a victory.  The Stars got goals from Sean Backman, Mathieu Tousignant, Travis Morin, and Greg Rallo en route to a 4-0 lead by the 4th minute of the second period.  If you only saw the second half of the game, it would look like a Griffins victory.
The Stars let off the gas and let Grand Rapids back in the game, allowing a shorthanded goals and two power play tallies.  Texas got control in the last minute to keep it from going to OT, something they could ill-afford with 5 games in 6 days.  The Griffins comeback, including an 18-5 shot deficit in the third period, is something that Texas will hope to avoid moving forward.
Stars Claw Back To Win In OT 3-2
(HDH blog link)
On Saturday night, it was Texas doing the comeback move and ending it controversially in OT against the Milwaukee Admirals (Nashville Predators).
The Admirals and Stars had split the season series so far, earning shutout victories for each of their respective netminders, Mark Dekanich and Richard Bachman.  With both in the big show due to injuries to the NHL starters, it would be a battle of the backups.
Milwaukee collected an early goal at the 2 minute mark of the game but both goaltenders proceeded to lock it down until the 3rd.  Chet Pickard allowed two goals in rapid succession to Colton Sceviour and Sean Backman.  The Ads would even the score with four minutes left in regulation to take the game to overtime.
It would end quite quickly from there though, as Greg Rallo snapped a shot in on net that rebounded out to Travis Morin who scored his team leading 11th of the season.  Milwaukee coach Lane Lambert was livid, pointing that the Stars' Rallo had interfered with (read: ran into)the Ads' goalie Pickard.  However, the goal stood for Texas and Lambert received a game misconduct for berating the referee. 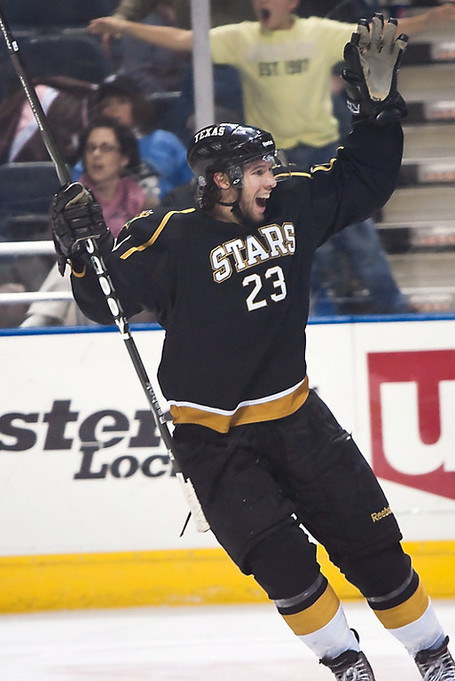 Stars Fall to Griffins 4-2, Split Road Trip
(HDH blog link)
Texas made the 5 hour road trip back to Grand Rapids, arriving at 3 AM, to face off against the Griffins in a matinee showing.
Texas and Grand Rapids traded goals through the first two periods with Travis Morin and Ray Sawada collecting tallies to keep each of their individual scoring streaks alive.  However, it was the Griffins breaking the tie in the third with Tomas Tatar's 7th of the year.
Tyler Beskorowany started all 3 games on the weekend, facing 122 shots against.  Overall he sports a 2-3-0 record. The 6 foot 5 inch netminder has great potential but this is his rookie season in the professional ranks, much less the AHL.  Bachman, who is performing admirably in the AHL, had a full year of seasoning in the ECHL with the Idaho Steelheads following four year of college at Colorado College.
The Week Ahead
The Stars have a less strenuous schedule this week with two home contests and one away.  The week starts with a return visit by the Manitoba Moose on Tuesday night.  Texas has a bit of time to rest their legs before two games this weekend.  On Friday, they will travel to San Antonio to visit the Rampage (Phoenix Coyotes).  They will then return home to battle the Hamilton Bulldogs (Montreal Canadiens), who they knocked out of the playoffs last year in game 7 of the Western Conference Finals.
Who's Hot
If you were reading through the post, you probably saw some names mentioned with quite a bit of frequency.  Travis Morin continues his scorin' ways this week (3-2-5, minus-1), leading the team in goals and currently on a 3 game goal streak.  Ray Sawada is also going streaking this week, on a 6 game point streak dating back to December 4th.
You may have also noticed Sean Backman's name. The rookie forward out of Yale has 3-2-5 and is plus-1 over that tiem period.  Backman plays on the "fourth" line, if you can even call it that.  Luke Gazdic uses his body to clear out space for Backman and fellow rookie Cody Chupp to operate, which has generated a lot of offense for the Stars.
Who's Not
Where has that Aaron Gagnon guy been?  He hasn't even showed up on the scoresheet recently. Just kidding; hope you're enjoying the forward's skill in Dallas.
I hate to harp on people but the expectations game is killing Tomas Vincour.  The forward, who was one of the last cuts from Dallas, is 3-4-7 and minus-1 in 26 games for Texas.  He plays on a line with Ondrej Roman and Francis Wathier, so it's not like chance aren't there for him.
Injury Report
Goalie Brent Krahn continues to be on the mend with a lower body injury.  LW Scott McCulloch, who was lighting up opponents early in the season, is on the way back from an upper body injury.  The winger out of Colorado College skated last week and could return for this week's game.
You can always follow the Texas Stars by reading my blog at HundredDegreeHockey.com, following me on Twitter @100degreehockey, or becoming a fan on Facebook.