Move over Stephane Robidas, there's a new +/- leader in the NHL and his name is Loui Eriksson.

Eriksson co-leads the league currently with a +12 and has 9 goals on the young season, tying him for third in the league with Sidney Crosby. His 16 points are good enough for 8th in league and it's worth noting that most players just above him have played two or three games more.

Friday night's four point performance was a career high and he had a five game point streak snapped Saturday in Colorado. His current pace (more than a point a game), while perhaps unsustainable in the long term, puts him on pace to shatter his career best 71 of a year ago.

Loui Eriksson was brought along "the right way" by the Stars organization. He came over from Sweden after playing in the SEL and spent a full season with the AHL affiliate Iowa Stars. He adjusted to the North American game, racking up 31 goals and 29 assists in the process and made the transition to part time NHL-er the following season.

His first career NHL goal came in his NHL debut on October 4th, 2006 in Denver. That was our first clue about this guy. He potted 36 goals in 2008-2009 and with only one year remaining on his contract and the financial situation worsening, Stars fans began to worry about the cost to keep a guy who many felt could go for 40 or 50 some day.

Joe Nieuwendyk and company signed Eriksson to a six year extension with a $4.2 million cap hit and now there's no worrying about how much those goals are going to cost the franchise. He can make a move on 40 or 50 now, and it appears he's doing just that.

After the jump we'll review some of the evidence highlighting how complete Eriksson's game has become already at age 25...

Posting video of his gorgeous penalty shot goal against the Penguins or his scintillating overtime winner over Martin Brodeur's shoulder in overtime on opening night would seem awfully indulgent to this Stars fan, pretty though they were. I trust you can find those should you wish for subsequent viewings.

Let's talk about some plays that might be a little more indicative of his overall game than those.

Here Trevor Daley makes an outlet pass that hastily gets the puck out of the zone, but Loui Eriksson is being converged on quickly by one Coyote with two more on their way to provide neutral zone pressure. With three Coyotes looking at the puck and Eriksson, he very smartly one-touches it to James Neal and it starts an odd man rush the other way for the slam dunk

This is a tired comparison, I know, but a smart play like that has Jere Lehtinen written all over it. At the time, in the arena, I didn't know how James Neal came by that puck exactly but when you go back and look at it you can see that Loui Eriksson made the whole thing happen with split second decision making.

He's doing good things on the penalty kill too, though he plays a little less than two minutes a game short handed. Here you see him on the PK pressuring up ice. Colaiacovo is in safe possession of the puck here with Loui pursuing... (Sorry, oddly enough the NHL doesn't archive video of takeaways) 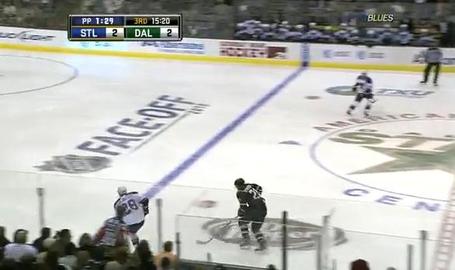 Eriksson (after having already scored one of the Stars' goals) would steal this puck right in the middle of the ice and create a short handed scoring opportunity that could have won the game for Dallas. (They would go on to win in the shootout. Loui scored a shootout goal as well just for good measure.)

You've probably seen this next one a few times but it is the epitome of what Loui Eriksson is doing this season as a presence with AND without the puck. He does all the dirty work down low...the kind you might expect a James Neal or a Brenden Morrow to do.

Loui Eriksson last year had one of the worst "hits taken to hits given ratio", which is to say he gets hit a lot and he almost never makes a hit on anyone. This plays into a perception of the "soft Euro" or what have you, but work like this is the work of a "power forward."

Yes, Loui had a little boo-boo with a tired pass that came back the other way and scored on Raycroft against the Avalanche on Saturday night, but no one is perfect. His -1 on Saturday was only his second negative rating of the year.

Eriksson is getting attention nationally now (well deserved attention) because of his outrageous offensive output in the last week but his game has evolved into one that is complete in all situations and in all three zones on the ice.

There are only two questions we must ask ourselves... Is Loui Eriksson the most "complete" player on this team?

And did you know that he can juggle?