Share All sharing options for: Dallas Stars Standing Out Among Statistical League Leaders

With a couple of days off between Stars games, I figured it was a good time to check out the individual league stats and how the Stars compare with the league leaders. The Stars have played 13 games, which is about as many as the rest of the league has played so far. (Except for the Chicago Blackhawks, who have played three more than anyone else.) What I found was that a few Dallas Stars are making a name for themselves around the NHL so far this season.

Note: These images are screenshots from NHL.com, so credit goes to their fantastic stats library. 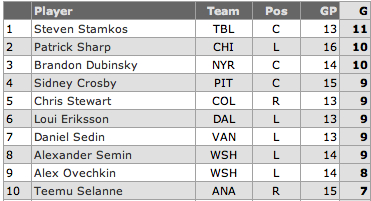 A little drop-off for Loui, who nonetheless is having a spectacular start. He's on pace for 56 goals and 100 points, and while he definitely won't keep up that pace all year, it's not a stretch to say that he could finish with 40. Brenden Morrow isn't far behind on this list with seven goals of his own.

After the jump, a look at where the Stars rank on other statistical leaderboards so far....

Yes, that's right: the Stars' top two centers are the NHL's third and fourth best puck distributors through the first few weeks of the season. It's painfully obvious though that Ribeiro is the only player on that list without a goal. But if he can keep up the point-per-game pace and mix in some scoring, he could keep up with Richards all season long.

Like I said earlier, Mike Ribeiro's goose-egg in the goal column keeps him off this list. Richards and Eriksson are on pace for a combined 212 points, a ridiculous number that won't actually be reached, but just goes to show how unstoppable that top line has been early on.

As Brad noted this morning, Stephane Robidas had led this category for the past week and a half before his teammate leapfrogged him. Again, Eriksson and Richards show up on a top ten offensive statistics list together. James Neal is all the way down at 27th with a +7, by the way, so not too shabby from him either. 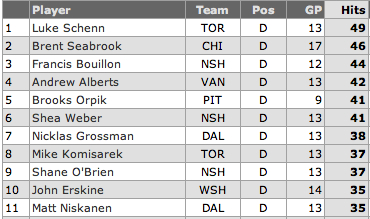 Nicklas Grossman has been playing with an edge this season that we haven't seen before, and it's showing up on the stat sheet. He's on pace for 239 hits this season, when he tallied 150 hits a year ago. I included a bit more in this list because a peculiar name appears just outside the top ten. All of the guys in the top ten don't surprise anyone. Luke Schenn, Brent Seabrook, Shea Weber, Shane O'Brien...they all are known for rough, physical, intimidating play.

But Matt Niskanen? The guy is on pace for 220 hits. (220!!) He only made 113 hits last season, and was probably hit himself twice that much. But I guess he wasn't kidding when he said he got serious about getting stronger this summer...that stat just makes his confident start seem that more impressive to me.