I think as a sports fan, traveling to different venues and cities to watch games that you wouldn't usually be able to is a necessity. I've only been able to experience out of market games a few times (a few Astros, Rockies, Chiefs and Suns games), and each time I've thoroughly enjoyed it. Something about living another fanbase's everyday life for a couple hours is just thrilling.

Since I now go to college only two hours from St. Louis, I (joined by Mizzou12 and TigerPride) had the opportunity to attend the Stars game in St. Louis on Saturday night. It was my first time to see a hockey game outside of the friendly confines of the American Airlines Center, and I can tell you that it was a MUCH different atmosphere, and a fun one at that.

The Center, the Atmosphere, and The fans

Scottrade was built in 1994, which I found surprising because I had thought for some reason that it was younger than the AAC. Just goes to show that assumptions are for chumps. It's one of the three sporting venues in St. Louis, the others of course being Busch Stadium (home of the Cardinals) and the Edward Jones Dome (home of the Rams).

Something you should know about the city of St. Louis: It's not exactly beautiful. Driving through it, it looked a bit...well, run-down. Off the exit from I-70, we immediately went through a part of town that looked like it hadn't been occupied in years, with pretty much nobody in sight. Downtown was a bit better, but it wasn't exactly scenic. But I'm probably being a bit too harsh on it, and honestly the closer you got to the stadiums and the river, the livelier things got. Parking was simple, there are multiple parking garages right next to the arena for only 10 bucks.

Anyways, Scottrade itself is a much different layout than what we're used to at the AAC. From what I saw, there was only one main entrance to the arena, located in front. Outside, there are three big statues of former Blues greats Al McInnis, Bernie Federko, and of course this man: 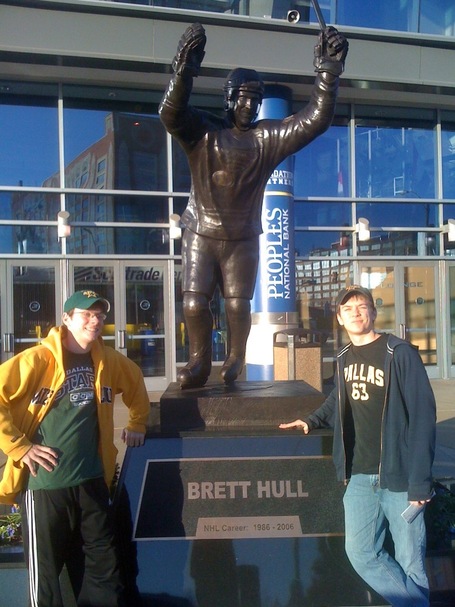 Which made me think of who the Stars would make statues of out front if we had new ownership...

Anyways, the inside of Scottrade was pretty spacious. Unlike the AAC's rather narrow passageways, the concourse at Scottrade was rather wide open and fans could get around fairly quickly and easily.

The arena was rather empty when we got there (about thirty minutes before the puck dropped), but it was packed to the brim when the game started. After seeing the lackluster crowds at the AAC all season, it was nice to witness a sellout crowd of 19,150 watching a hockey game.

Because there is no NBA team in St. Louis, the Blues have Scottrade all to themselves. The seats and interior part of the stadium are painted with blue colors, and you feel like you just walked into a giant blueberry. Scottrade seats just about the same as the AAC, but the layout is such that there really are only two levels of seating. (By the way, while I'm talking about seating...we paid $37 for the cheapest upper level seats in the building. Back in Dallas, we would've paid about $17 bucks. Don't take that for granted, folks.)

Before their pregame video, a local blues singer sang "When The Blues Go Marching In". I mistakenly thought this was the official intro, but I was dead wrong. Soon after, Louie the blue polar bear mascot came out with a bag of items. After throwing out a few, he finally found what he was looking for: a blue airhorn. He then led a "Let's go Blues!" chant with the Airhorn for about a minute. The crowd was pumped for hockey, and this STILL wasn't even the intro video. More on the fans in a minute.

The great thing about a Blues game is the lack of blaring music in between the action on the ice. At the AAC, it's customary for the PA system to start playing some sort of music while play has been stopped. Some of the songs are okay, but they're usually hit or miss and you don't really even notice it after awhile.

At Scottrade, they don't do that. Instead there is a live organ player who will play any number of short ditties in between play, many of them recognizable for the crowd to sing along to. It's subtle at first, but soon you start to realize what a great trick this is to keep the crowd into the game when nothing is going on. It sort of reminded me of a baseball game, in that sense. Also, the organ plays "When The Saints Go Marching In" after every Blues goal. It really helps sell the atmosphere in that arena.

The fans were...well, quiet. My roommate from Boston was with us, and he's been to many Bruins games out east. He remarked to me that "the most hockey-smart people in the building might be these four seats we're sitting in." I don't know if that's true, but I think what he was saying was that the crowd was unusually quiet compared to other games. I said it's a matter of markets: St. Louis fans are like Dallas fans, we aren't as lively during play as most big market games I guess. I will say this: I've been to a lot of Stars games in the bleacher seats where there will be some rowdy fans yelling down at the ice or just making noise for the sake of noise. No such thing where we were sitting, which I liked. They all seemed to be focused on the game.

The crowd definitely seemed to be into the game throughout. Every missed opportunity, turnover, or hit was met with a large response from the crowd. Late in the third period, they (unprompted) raised tons of noise to help give their team a boost. Unlike at the AAC of late, the team and fans seem to feed off each other well in St. Louis.

A few other assorted notes from the experience:

Overall, the experience at the Scottrade Center was a good one. The atmosphere was refreshing, and just goes to show what good ownership and a good marketing department can do for a franchise in a "non-traditional" market.

Oh, and the Stars won. That always helps.