Stars Preparing to Deal with the Speed of St. Louis

Share All sharing options for: Stars Preparing to Deal with the Speed of St. Louis

The Stars will play the Blues for the second and third time this season tonight and tomorrow and call me crazy but I'll be glad to have most of these meetings behind us already. Not because I believe the Blues are leaps and bounds better than the Stars. Far from it. It's just that, as they say, "Styles make fights" and St. Louis' style gives the Stars fits. We saw it with Colorado twice recently. These teams will skate circles around you where you stand.

I asked Marc Crawford this morning if this is something they include in their game prep and he admitted it's a topic they do talk about.

"Speed is dangerous when you combine it with guys who have great puck handling skills. They've got a few of those in Andy McDonald and Brad Boyes and [some of the guys who are injured]."

St. Louis is one of the youngest teams in the league and what they lack in experience they make up for in enthusiasm. A back to back meeting will probably favor their young legs on Saturday night, especially at home where they've been virtually unbeatable.

"Those are guys you want to make sure you're aware of and keeping your positioning and keeping a step on them," Crawford said. "Because if they get a step on you their creativity with their stickhandling abilities as well as their shooting abilities become dangerous assets for them."

"Our guys are aware of the guys that can hurt them."

After the jump, a little game Brad Richards and Loui Eriksson played at morning skate... 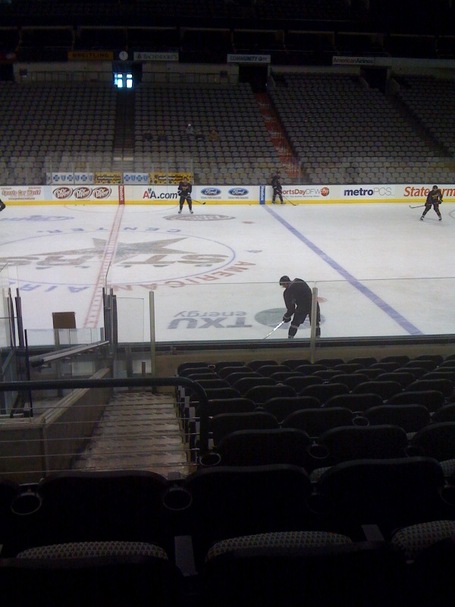 I thought some of you might get a kick out of what Brad Richards and Loui Eriksson were doing after the serious practice time of morning skate had expired and most players were working on their shot or faceoffs.

The two stand the rink-width apart, like so, and send exaggerated saucer passes across the rink, landing them just before they get to each others stick. The objective seemed to be to land the puck in front of your opponent and get it to hit the boards behind them.

This went on for some time until Loui Eriksson (near boards) raised both arms in apparent victory having gotten one past Richards, reaching some previously agreed upon number of goals, and skated toward Richards.

Brad did not like this and started yelling (loudly) at Loui, saying the puck was out of the agreed upon imaginary goal zone behind him.

It was reminiscent of children arguing and making up rules to a game as they go along. It's light hearted, fun details like this I wish more fans could see. These are people who like to have fun but are also incredibly intense. (Especially in the case of Brad Richards who is intense about everything, it seems.)

Anyway, a bit of fun from morning skate. I think Loui still won.