Share All sharing options for: Reason #1,121 To Vote For Loui Eriksson 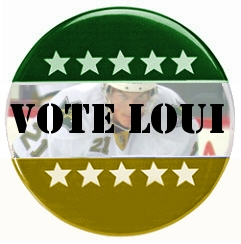 This is an election of sorts and we have no intention of slowing down at all, so let's keep rolling with our relentless propaganda (#sarcasm), slogans, signs, lies and every other thing a politician in this country (on both sides) does to get someone voted in:

Which is to say: VOTE LOUI.

In a side note, vote Brad Richards as well. Brenden Morrow and Stephane Robidas are already on the ballot so vote them as well. Fill in your defensive ballot with some random spare from the East (aren't they all random spares in the East?) and submit that bad boy.

I've had people ask me about writing in Kari Lehtonen. This is a noble goal, but "making the big save at exactly the right time" is not a quantifiable, demonstrative stat, so I don't know that we could really make that happen. He's been great for this team so far but it's not yet recognizable on a national scale.

Either way, enjoy this bit of Loui this season courtesy of NHL.com, and for the love of Stephane Robidas' eternally healing nose.... VOTE LOUI.