Hockeymetrics: A Look at the Stars Special Teams and Even Strength Play Through Boring Line Graphs

Share All sharing options for: Hockeymetrics: A Look at the Stars Special Teams and Even Strength Play Through Boring Line Graphs

All data is supplied by the great folks at our sister site, Behind the Net Hockey. If you want to peruse the gargantuan amount of data, you can visit their NHL stats site.

And here's your boring line graph with little statistical nuggets to chew on. Don't worry, I ensured they're throughouly cooked so you won't get Salmonella poisoning. 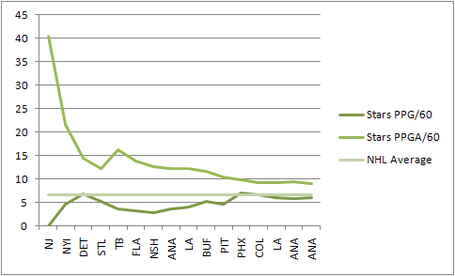 The first thing you'll probaby notice is that the PPGA/60 spiked after the Islanders game and the Tampa game. The Stars already started out the season at over 1 thanks to giving up a Jason Arnott power play goal on the only power play chance that New Jersey had in the season opener 1:29 in.

Obviously, we have factor in the fact that this was a small sample size to work with. But still, the double mountain peaks on the graph really stick out.

What also sticks out is how much that's leveled out since the Tampa game. The Stars didn't give up any power play goals against in their next two games and surrendered one or less in the following six before giving up two to Los Angeles a week ago and one each in their last two games against the Ducks.

As for the power play, well...it's getting a little better. They did have a three power play goal performance against the Coyotes on November 5th. But that's proven to be an outlier as the Stars have scored one power play goal or less in 14 of their 16 games played.

So how were they able to jump out to that 5-1 start?

Even strength play. Brad hit on this earlier in the season. But again, nothing illustrates like a line graph, baby! 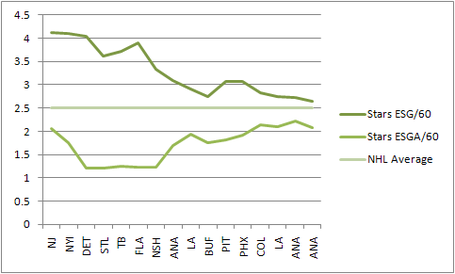 You'll also see that the the Stars falling back to Earth after that hot start is reflected in their 5 on 5 play. Through the first six games of the year, the Stars scored four ES goals each against New Jersey, the Islanders, and Detroit. They followed that up with two against St. Louis, and then four each against Tampa Bay and Florida.

Since then, they've scored more than two ES goals in a game just once (November 3rd against Pittsburgh with 5).

What I think this tells us is that their penalty killing has improved to the point where they don't necessarily need their power play to be firing on all cylinders to win.

But their even strength play absolutely has to get back to that level early in the season if they hope to do more than just tread water in the uber-competitive West.