Share All sharing options for: VIDEO Of Steve Ott's Goal, The NHL's Explanation & Instructive Screengrabs for the Satellite Hotstove Panel

Things were certainly messed up with this one. In the end, I think the consensus is that the puck did in fact travel over the line. I've received several emails and the comments are full of statements with people at the game claiming a shot on the board showed the puck over the line. Yet the issue at hand has more to do with how the play was handled by the on ice officials and there's no doubt they blew this call, just by how big of a mess it's become.

Therefore the call on the ice was upheld. Good goal.

What's even more frustrating was that none of this information was made available to anyone. According to Heika, the media had to dig out the truth of what happened. If I were the Red Wings I would be incensed, but I'd also remember one thing: Detroit surrendered a two goal lead anyway.

It's just unfortunate that such a great game will be remembered for yet another officiating gaffe that went against the Red Wings.

Follow the jump for the short email from the NHL along with screengrabs from Brandon Bibb showing that just because you're the closest ref to a play doesn't mean you have the best angle:

From head of officiating Rob Martell, courtesy of Mike Heika:

``Actually, the linesman who was on the goal line on the other side of the net and the back referee who was trailing the shooter both confirmed the puck was 100 per cent over the line. The referee on the goal line was blocked out and did not see the puck cross the line and therefore waved it off from his angle.It went to replay in Toronto and replay was inconclusive so the call on the ice stands.''

[Update by Brandon Bibb] Paul Kukla posted a YouTube of HNIC's Hot Stove discussing this goal, as well as a number of other topics.

As you might expect, that crew thinks they got the call wrong. And right now, I'm in the camp that suggests the puck didn't completely cross the goal line.

But if you're going to discuss this on television, allow me to make a few points. First, they're incredulous as to how the ref closest to the play, Rob Martell, could waive the goal off but still be convinced by the other referee, Mike Leggo, and the the linesman on the other side that it went in.

Well, as you can see from this screen grab, it's really not that hard: 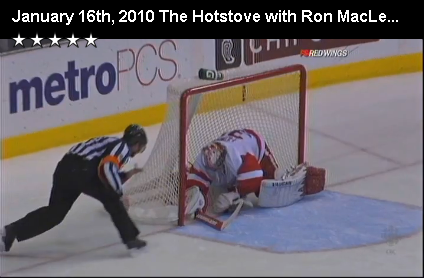 Yes, Rob Martell was the closest ref of the three watching the play unfold. But being the closest ref to the play doesn't really do you any good if Jimmy Howard's glove is in the way and obstructs your view of the puck because you're right on the goal line.

On to Exhibit B: 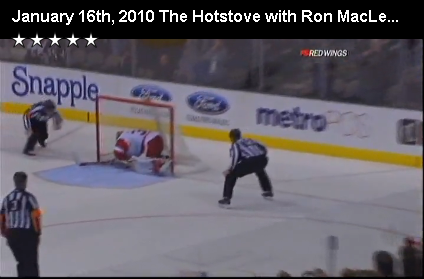 Here we see referee Mike Leggo trailing the play. Sure, he's 30 feet out (and not 50 like that idiot Glenn Healey suggested), but he has something that Martell didn't have.

A CLEAR LINE OF SIGHT OF THE PUCK!

You'll also notice Lonnie Cameron to Jimmy Howard's left. Because of the way Howard turned his glove to the backhand so he could swat the puck off the goal line (or out depending on your POV) and because Cameron is not right on the goal line, he's not screened and has a clear line of sight to the puck.

Now all that having been said, I've watched countless videos on my PC and my home DVR of this play. I also have a standard definition TV.

Based on the angles shown and the number of times I've watched tonight, I can't say definitively whether the puck crossed the line or not. But based on what I've shown you here, I can see how Lonnie Cameron and Mike Leggo could have called it a goal based on their vantage points.

I have to assume that when all three got together to discuss the goal, Martell admitted that Howard's glove probably screened him and he made his wash out call based on what he saw. Leggo and Cameron made their calls based on what they think they saw.

And the way the replay rules are written just about negated any possibility that call was going to be overturned.

And like Brandon said originally, Detroit had a team that had lost 6 out of it's last 7 down 2-0 after the first and on the ropes. And they didn't put another puck past Alex Auld after that.

Not even through six rounds of the shootout.