It's good to have them back. What more can we say? The Dallas bench and the American Airlines Center itself both boasted some changes on Wednesday night as the Stars defeated the Lightning 4-3 in a come from behind win that needed the shootout to settle things.

There were a lot of things to keep an eye on tonight, as the style of play from the Stars has been reported to be changing, Jamie Benn skated with Mike Modano, Tyler Beskorowany got a chance to prove himself (update: word is coming down now that he's been signed to a pro contract), and Marc Crawford was presented to a Dallas home crowd for the first time with emphatically mixed reaction. The Lightning had story lines of their own, boasting new defensemen both young and old as Victor Hedman made his NHL pre-season debut.

Follow the jump for my observations from the game and a look at those new HD scoreboards in the arena...

This game featured 19 minor penalties and two fights. For a pre-season game that was niether particularly physical or nasty by any stretch of the imagination, the two teams sure did rack up the minutes. Some of it was young, sloppy play, and some of it was just getting re-adjusted to the speed of the game. (And perhaps a little of it was the zebra's just doing what they do best, but I digress...)

The Stars PP unit featured a four forward line (something not seen in practice) and included Brad Richards and Matt Niskanen at the point, Modano, James Neal and Loui Eriksson up front. The second power play unit featured Jamie Benn and Steve Ott with a host of unsavory characters like Andrew Hutchinson and other people I don't want to see on a PP line.

Let's just say I have some concerns here and I'm not really sure it's fair to judge it on a night like tonight with all of the penalties being tossed about with reckless abandon by the refs. The new HD screens gave us a great look at Crawfords face every time play was bogged down with special teams, and while he was civil, he looked a little frustrated. Neither team was able to roll the lines like they wanted to and establish any kind of rhythm in the 5 on 5 game.

Even so, I thought the pace of the game slowed significantly the longer it went on. I don't want to say that players were tiring, but perhaps became more tentative in the second half of the game. By the time the 3rd period rolled around I was wondering what happened to "up-tempo" and was it ever coming back?

Alright, it's a pre-season game, let's not analyze it to death. They got sloppy, they got behind, and the big boys buckled down and found a way to get it done. Neal, Eriksson and Richards was a great line tonight.

These were the talk of the arena...

These pictures do them little or no justice, but they're pretty spectacular compared to what was there before. Heika called it "jerryworld junior" which I think is apt. 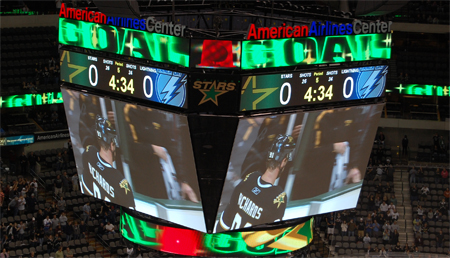 The game presentation was greatly improved upon for the first time in many years.

And thanks to everyone who participated in the game thread. That was fun.