Sunday Morning, as predicted , the smiles of yesterday had disappeared in Frisco. They were replaced with a sense of determination, concentration and sweat as the Dallas Stars began their first official practices of the 2009-2010 season. Head Coach Marc Crawford and his staff worked the players hard today, culminating in a furiously paced scrimmage showcasing the teams new "get up and go" philosophy.

Drills included a focus on dump and chase (forecheck) and a number of exercises on exiting the zone with a fast transition game, and a brief foray into one-on-one's, making the defensemen defend in space at high speeds as they retreated toward the goal. Everything was done at what seemed to be a pretty up-tempo pace.

After the jump, goal scorers from the scrimmage, line combinations, a goaltender report and other goodies from our day in Frisco...

If today was any indication, when the Stars re-gain possession of the puck in their own zone, the days of taking it back behind the net and surveying the ice before starting the counter attack are over with. The game was played with some serious pace, with both teams turning the puck up ice at the drop of a hat, displaying speed that you didn't know some of them were capable of (Ribeiro). The lines were consistent for the most part from practice to the game. Lines I observed went something like this:

Toby Peterson did not play, nor did Jere Lehtinen. Jamie Benn spent time with the Ribeiro/Morrow duo, but had a good shift with Modano and Sutherby and stuck there the rest of the scrimmage. I thought Benn's showing was weak at first, but after he got with Modano he became much more noticeable out there.

Sergei Korostin in particular was very noticeable as well, and not just because he scored the opening goal, unassisted off of a little scrum in front of the net. James Neal, Karlis Skrastins, and Tom Wandell were also making the crowd take notice.

The Ribeiro/Morrow express has lost none of it's potency. Those two had some nice sequences and were joined at the hip in every drill and every shift, all day. As they should be. By the way, Ribeiro even overstays shifts in pre-season scrimmages.

Ivan Vishnevskiy carried the puck well when he did, but it wasn't often enough for my taste. And who did he play with? 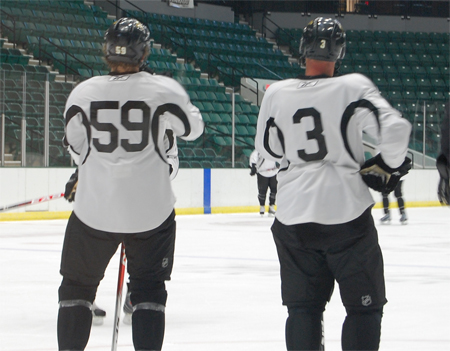 The defensive pairings looked to me to be:

Both in the drills, and in the scrimmage I was amazed at how mobile Karlis Skrastins looked. After what we had heard about him, and after the comparisons to a Norstrum type player, I did not expect to see him move like he did today. He was active in the transition game, and his accelaration surprised me every time he got going. If they do indeed need people to be able to defend in the open ice, he might be better than some originally thought.

Sergei Korostin scored in the first half, unassisted for the white team. For the black, Brian Sutherby scored on the tail end of a great shift by he, Modano and Jamie Benn, who both assisted. The game winner came after a minor penalty, today awarded by penalty shots. Brad Richards bamboozled Bachman with a great move, and the white took it 2-1. All the pace and tempo and the score was still low. That's either a good sign (they can still defend?) or a bad one (up tempo and they still can't score?), you tell me.

Coach Crawford did not opt to be on either bench, preferring to watch from up top in the beautiful Dr. Pepper Arena:

The goaltenders were there when I arrived at 8:45 am, practicing before the scheduled team practices. They practiced at the team practices. They played in the scrimmage. Then they went back to the practice rink for another 45 minutes of work with coaches Moog, and Valley. They ran through agility drills, stick handling drills, etc. They did everything, and they worked their butts off. Members of the Texas Tornado were on hand early in the morning to fire pucks at the six netminders.

Mike Heika told me that he expects the presence of Mike Valley to be a boost for Marty this season, in addition to Moog being around full time now.

I am really impressed with Tyler Beskorowany. He's a big, confident kid, and he just looks really comfortable out there. In fact, Bachman might be the only goalie of the six in camp that didn't have a great day.

Though Jere Lehtinen looked fine yesterday, he was held out of both practice and scrimmage, and will be out at least 5 days with a groin/hip thing. I asked him about it later as he was leaving and he didn't much want to talk about it, saying "Don't worry, I'll be back."

Toby Peterson was out of the scrimmage as well, but did practice before. As he walked down the tunnel, he seemed to walk fine, but was wearing something hardly noticeable on his left foot under his tennis shoe/sock. I asked him about it and he smiled and said simply "it's close."

Aside from Steve Ott's jarring hit on Jamie Benn during the scrimmage, the physicality was light (though it did escalate steadily throughout the game)

Colton Sceviour, however, managed to launch himself into assistant coach Stu Barnes during a drill in the morning practice right in front of me in the corner. 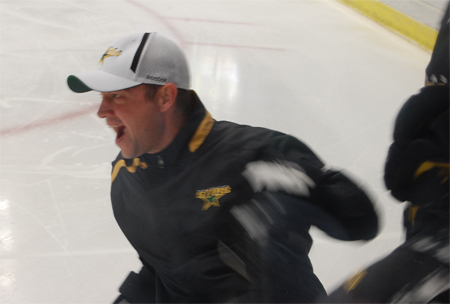 Coach Barnes got up with only minor bruising of the ego.