On a very gloomy day in Frisco, the Dallas Stars 2009 training camp officially got under way on Saturday with physicals, and a "captains practice" that could be describe in only one way: jovial. Players signed to NHL contracts (including Warren Peters, signed to a two way deal) practiced on the Stars practice rink, and the rest of the prospects, I later found out, skated in the newly renovated Dr. Pepper Arena ice.

The NHL group practiced for a little over an hour, light heartedly skating through a variety of transitional drills up and down the ice, 2 on 1's, 3 on 2's, and so on and so on. Captain Brenden Morrow issued the instructions, with Stephan Robidas, Steve Ott and Mike RIbeiro appearing to chime in as well from time to time.

Captain Morrow (or the coaching staff beforehand) constructed the lines for the drills in some familiar combinations:

After the jump: Line combinations, Marty Turco racked a certain forward between the legs, and more pictures from Frisco...

These lines performed 2 or 3 drills together, and incidentally, match the lines on my EA Sports NHL 2009 game. I am sure you wanted to know that.

Despite these line combinations, Mark Stepneski says that Marc Crawford is leaning more towards these pairings, separating Lehtinen from Ribeiro and moving him with Modano.

Crawford did shed a little light on what he’s thinking about line combinations and right now he’s thinking in pairs, which is what most coaches do. The ones he mentioned are:

Hmm...We all know how Ribeiro likes that right handed shot on his line.

The defensive pairings appeared to be these for much of the session:

Tyler Beskorowany got the call to be the netminder opposite Turco for this practice. The two talked and skated briefly before practice got rolling.

Marty Turco was spry, and alert. He had some nice sequences, much to the chagrin of his teammates when the competitive juices got flowing. Once, Loui Eriksson set up shop a little too close to the crease, and the goal stick found it's way gently to Loui's special place much to his surprise, which illicited quite the laugh from the crowd, and a bemused but annoyed look from Mr. Eriksson back Marty's way. It was smiles all around. 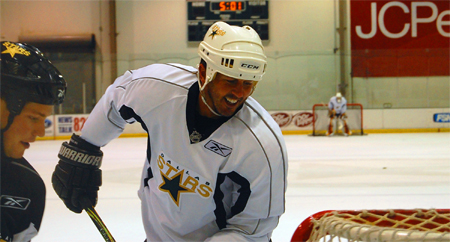 Mike Modano could not stop smiling. He seemed to enjoy himself the most, and I enjoyed seeing that boyish grin as he worked for pucks in front of the net. Many I spoke with today wondered if the smiles are likely to disappear when Mark Crawford takes the ice tomorrow.

As for everyone else, like I say, it was jovial. The work will come tomorrow. James Neal looked comfortable out there, belonging with the big boys. Steve Ott initiated a little contact here and there for a laugh. Brenden Morrow and his knee looked fine when he got going up and down the ice. He did not seem to hesitate or favor it any way.

Please check back with us tomorrow night for a look at Sunday's structured practice with Coach Crawford and subsequent scrimmage.

In the mean time, know this: 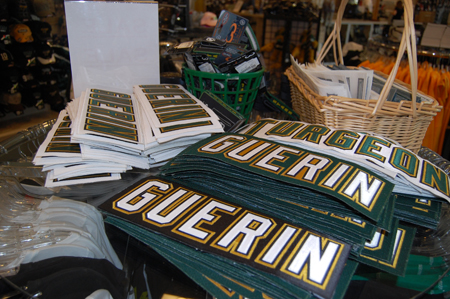 You can still buy a Bill Guerin nameplate for the back of your jersey. 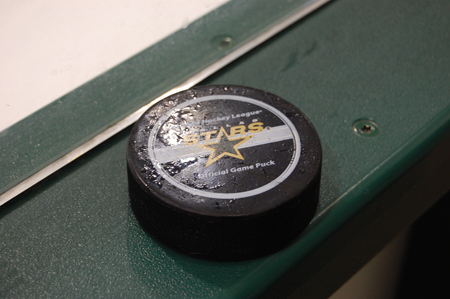 We managed to get a puck that squeezed through the netting/glass behind Marty's goal.