Stargazing: Catching up with ex-Stars

Share All sharing options for: Stargazing: Catching up with ex-Stars

Stargazing is a daily assortment of Dallas Stars news, as well as a look at what's happening around the Pacific division and the rest of the NHL. Stargazing will run on Mondays and Thursdays, becoming a daily feature once the preseason begins.

As we crawl towards the start of training camp and the pre-season, the NHL related news grinds to a halt. While that's going to turn around two weeks from now, the reality is that on this Monday morning there are precious little Dallas Stars tid bits for your brain to consume, so I thought it might be fun to see what some former Stars are up to, what their summers were like and what they're expectations are going forward for 2009-2010.

Most prominent this off-season amongst ex-Stars, and rightfully so, Bill Guerin had his day with the Stanley Cup a few weeks back, and as you can see he wasted precious little time getting down to business: 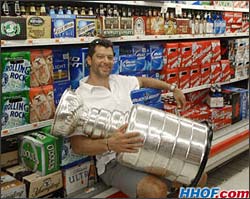 For Bill Guerin, it was a long, agonizing 14-year wait between the Stanley Cup championship he won with the New Jersey Devils in 1994-95 and his contributions to the Pittsburgh Penguins' victory in 2009.

In between Stanley Cup celebrations were stops in Edmonton, Boston, Dallas, St. Louis, San Jose and Long Island. The much-travelled, highly valuable Guerin was in the right place at the right time. Call it synchronicity. Call it fate. Bill's overtime goal in Game Two of the Flyers' series, his second of the game, was a pivotal moment in the 'March of the Penguins.'

How can anyone not love Billy G? Sure, you wish it were with the Stars, but that just didn't work out here.

Next up on our list of ex-Stars for this morning, we check out BJ Crombeen. It didn't seem like a big deal at the time, but the loss of a young bull of a right wing (a real need in Dallas) kind of hurt after a while, didn't it? Chalk it up to more Sean Avery cap space issues, or say that it enabled James Neal to really get going last year, whatever...it still seems pretty lousy. Now, St Louis gets to be excited about him playing with Kariya:

The line gives the Blues some chemistry with the power of Crombeen, the speed of Kariya and the playmaking skills of Berglund.

Crombeen was a surprise to both fans and the coaching staff. A mid-season pick-up from the Dallas Stars, Crombeen made a name for himself mucking up the front of the net and recorded one of the few hat tricks on the season for the Note.

Yeah, I think this one is going to sting for a while. Still, I wish the young man luck.

After the jump, Mike Smith, Jeff Halpern and Jussi Jokinen with notes from the Stars and the NHL...

Foremost on the minds of some Stars fans last year was Marty Turco, and how much they missed Mike Smith. Smitty had a very challenging year in Tampa Bay. He played only 41 games and recorded only 14 wins before suffering a concussion and sitting out the remainder of the season. Things didn't get any better for Mike in August when he was struck in the head again:

Mike Smith got a little scare when he took a shot to the head by a 14-year-old.

Smith was taking shots from kids who attended Smith's personal coach's camp. He was wearing a helment and mask and has reportedly suffered no ill effects from the blow. Although this might be considered a minor incident for most players, Smith spent the better part of the last six months off the ice as he suffered from post-concussion syndrome. He only began skating again last week, but the Lightning expect him to be ready for the start of next season's training camp.

The handicap of playing for Tampa aside, I'm sure that Smith is ready to have a much better year. Do you think that if he had somehow stayed in Dallas, he would be in the discussion for the long term goaltender plans?

Good American Jeff Halpern (of Halpern/Barnes/Lundqvist fame) is looking forward to what he hopes will be his first full season in a while:

Halpern returned from a serious knee injury in December -- perhaps a few weeks too early -- and did not get fully up to speed until much later in the season. He finished with 16 points in 52 games -- his lowest point total as an NHLer.

"I didn't feel 100-percent comfortable," Halpern said. "It's difficult to jump into the middle of a season. So, obviously, I'm much more excited about how I feel on the ice right now."

Which is a good thing for the 33-year-old. He's entering the final year of the four-year, $8 million contract that Dallas used to lure him away in 2006 after seven seasons with his hometown team. Halpern knows he needs a solid year -- the type he had in 2007-08 when he totaled 20 goals and 22 assists for the Stars and Lightning -- to earn another lucrative multi-year contract.

Then there's Jussi Jokinen, who managed a new contract with the Hurricanes but still gets talked about a lot because of his shootout prowess a few years back.(And look for a neat Brenden Morrow note on that one). Or way-back-when former Star Jamie Langenbrunner who will remain Captain of the Devils this year under Jacques Lemaire. Do you still root for any of these guys? Or once they're gone, they're gone? I have to say that with the case of Jokinen, I found myself strangly annoyed that he was scoring all of those clutch goals for the Canes last year. Where was that 2 years ago? But with Jeff Halpern, if you've ever had the chance to meet him, how could you not root for him? He's a great guy. Same with Bill Guerin.

I enjoy following these guys and I hope you do too. The Stars try hard to make their team a family, and their efforts cause the personalities to shine through and engage us beyond the Star on their sweater. Unless it's Sean Avery. I don't much care where he is or what he's doing, to be quite honest.

Thoughts on playing another year for the Dallas Stars:
"It’s nice to be back, and I’m looking forward to it of course. Last season was a disappointment, we didn’t make the playoffs and it was a tough year for the team. I know the guys and I want to improve and I think we are doing it. It’s really great to be back. I didn’t even think about going anywhere else. Dallas is my first and only team, I’ve been here so many years and the organization is really great. We put up a good team every year. I can’t even think about going anywhere else."

True or not, that's what we like to hear. Is there a better representative of what Dallas Stars hockey has meant over the last 10+ years than Jere Lehtinen?

A teammate of Jamie Benn, Kyle St Denis is coming to Dallas for camp next month, but they expect to see him back in Kelowna when it's done:

St. Denis was getting some game action in before he heads off to the Dallas Stars training camp, where he has been invited for a free agent tryout.

Concussion and wrist problems limited the speedy winger to 22 regular season games last year and six more in the playoffs. St. Denis is hoping his injury problems are behind him and so does his team. With players like Jamie Benn, Cody Almond and Mikael Backlund almost certainly lost to the pros this year, St. Denis is expected to take up some of the slack.

"I think as he he progresses and gets a chance to go to his NHL camp, he’s going to come back with more and more confidence and be a very big player for us this year," said Huska.

(Ron Wilson:) "I see Mike Modano, along with Chris Chelios, serving in a different capacity. Those guys are the tribal storytellers who can pass on what it felt like and what it means [to wear the USA Hockey crest]," said Wilson, who coached Modano on the U.S. squad that won the 1996 World Cup of Hockey and then finished a disappointing eighth in the 1998 Nagano Olympics.

The thing I took away from that is that there exists a USA Hockey Magazine.