Getting to know Karlis Skrastins

Share All sharing options for: Getting to know Karlis Skrastins 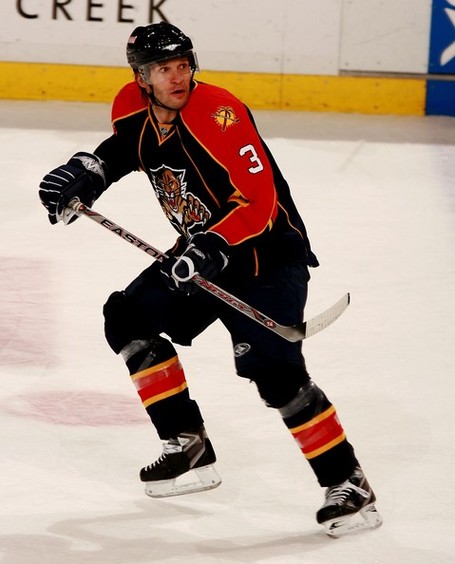 The Dallas Stars began the offseason with a need for a veteran defenseman. Both Darryl Sydor and Sergei Zubov, both long time Stars defensemen, became free agents and it was uncertain whether they would be willing to re-sign one or both. Zubov has had health issues the past few seasons and played just ten games for the Stars in 08-09 and Sydor, while it was great to see him back in a Stars uniform, had obviously lost a step. Yet it was important that the team find a reliable veteran to come in and help the squad of young yet talented defenseman continue to learn and develop.

Without Zubov and Sydor, Stephane Robidas was the most experienced blue-liner on the team. While Robidas was solid while taking over the role of the Stars' top defenseman, he was far from the offensive and emotional spark he had been for the team in 2007-08. With added minutes and more responsibility, Robidas wore down as the year progressed and missed the final seven games of the season.

With Dallas still hoping to work something out with Zubov, the search began for a suitable free agent that fit into the team's budget and who could provide the needed veteran presence on the blue line. Karlis Skrastins, a 10 year NHL veteran, signed with the Stars for a two-year contract worth $2.75 million.

Follow the jump for a look at Skrastins career, his impact on the Stars' defense and a quote from Litter Box Cats.

Karlis Skrastins was born in Riga, Latvia and began his professional hockey career playing for TPS Turko of the Finnish hockey league SM-Iiiga. It was then that Skrastins began to be known as a dependable, solid defenseman who rarely missed a game (just 4 games missed in three seasons). He was eventually drafted by Nashville  in 1998 and played the next five seasons with the Predators.

It was while he was with Nashville that he would start the streak that would put him into the record books. Between 1999 and 2007 Skrastins played in 495 consecutive games at defenseman, passing Tim Horton for the longest playing streak in NHL history for a defenseman (although it must be noted that this streak eclipsed the NHL lockout in 2004-05, which in no way takes away from this incredible accomplishment). At one point he played all 82 games for five straight seasons.

Skrastins signed with the Colorado Avalanche in 2003, playing there for four season before being traded to Florida in exchange for Ruslan Sulei in February 2008. After so many years as the NHL's resident "Iron Man", Skrastins had the first injury issues of his career during the 07-08 season, playing in just 61 games for the Avalanche and Panthers (a low number by his standards).

It was this past year with the Panthers that Skrastins had perhaps his best season in the NHL. Playing alongside Jay Bouwmeester, Skrastins appeared in 80 games and had the best statistical season of his career (4G, 14A, 18Pts, +9) and led the team in blocked shots.

I talked with Whale4Ever from Litter Box Cats about their departed defenseman, who had this to say:

Losing "Skras" was a bit of a surprise, unless Panthers management knows something we don't. A former NHL Ironman with five consectutive 82-game seasons, he shows up, never lacks for effort, and blocks an absolute truckload of shots. He's positively fearless.

If there's a stigma surrounding his time in Florida, his former dance partner shoulders a portion of the "blame": Skrastins was teamed with Jay Bouwmeester. Did Calgary's new golden boy make make his linemate look better? For this reason, it was difficult to judge him on his own merits, and that's unfortunate.

Skras won't ever be mistaken for an offensive guru such as Mike Green or a tenacious hitter like Dion Phaneuf. He is a classic stay-at-home guy who is rarely caught out of position (the "Bouwmeester factor" again?). Don't expect him to be leading the attack...ever. Hesitant to jump into the offensive zone.. Perfect complement for a high-tempo second-line D-man.

If there is one former Stars that Skrastins reminds me of, it's Craig Ludwig. He may not be the tenacious hitter that Ludwig could be at times, but his ability to block shots and use his size cover the backside of the net is something the Stars have lacked for a while. His experience and dedication to being both physically and mentally ready to play the game of hockey each and every night is an attribute that is incredible valuable to a Dallas Stars team that is getting younger each year. While Matt Niskanen, Nicklas Grossman and Mark Fistric are all going to be entering their third season of NHL play, there's no doubt that having a positive veteran influence alongside will help their growth and development.

While the argument that Skrastins benefited last season to playing next to Bouwmeester is understandable, he still enjoyed a very solid season on his own merit. Skrastins had the lowest Goals Allowed per 60 minutes while on the ice (GAON/60) for any Panthers defenseman last season and would have been tops on the Stars as well. His overall +/-  was better than his partner Bouwmeester and would have second among Stars defenseman behind only Robidas. While he'll never be known as an offensive playmaker, his solid and consistent play in his own zone is infinitely valuable to any team hoping to rebound from a poor defensive season. Such as Dallas.

Skrastins' impact will not just help out the young defensemen. Stephane Robidas should feel a bit of a weight lift off his shoulders after spending nearly a full season as the team's top blue-liner. With Skrastins along to eat up a bunch of minutes on both 5 on 5 and the penalty kill, Robidas will be able to return to the role that made him such a dangerous player in 2007-2008. When fresh and healthy, Robidas can be an assett on the power play (seven PP goals in 07-08) and even more dangerous in the playoffs.

While Karlis Skrastins is far from the offensive genius we have been hoping for on defense, he is a much needed and valuable addition to a defense that is still learning and growing. Finding the next Sergei Zubov is a near-impossible task and the Dallas Stars understood this. With teams throwing around incredibly inflated contracts in free agency the Stars made the safe and smart choice, both for the short and long term.