2009 NHL Draft: Alex Chiasson is ready for the challenge

Share All sharing options for: 2009 NHL Draft: Alex Chiasson is ready for the challenge

The Dallas Stars second round draft pick knows what it takes to make it to the NHL.

In the time leading up to the NHL draft, some hockey players get the feeling they know exactly who is going to draft them. It's either a gut feeling, a hopeful wish or just plain logic but eventually it becomes a waiting game to find out when, not who.

Alex Chiasson (pronounced shay-SAWN), the 38th overall pick in the 2009 NHL Draft, had that exact feeling and he knew it would be the Dallas Stars that drafted him.

"I knew it would be Dallas."

Getting yourself ready to be drafted by the Dallas Stars is one thing. Preparing to make it at the next level on your way to the NHL as a second round draft pick is another thing entirely. Fortunately, Chiasson has learned from one of the best when it comes to preparing players for the NHL.

After playing hockey at Northwood prep school in Lake Placid, NY, Chiasson was drafted by the Des Moines Buccaneers of the United States Hockey League. It was great chance for him to play junior hockey under a coach who knows exactly what it takes to make it to the NHL, Jean-Paul Parise.

J.P. Parise was a two time all-star for the Minnesota North Stars in the early 1970's, and after retiring from hockey wernt on to become a long-time coach in organization. After spending several years as an assistant coach for the North Stars, Parise moved on to become the coach and hockey director at Shattuck-St. Mary's. Under Parise, future NHL stars Jack Johnson, Jonathan Toews, Zach Parise (his son) and Sidney Crosby played for the Sabres before moving on to junior hockey. 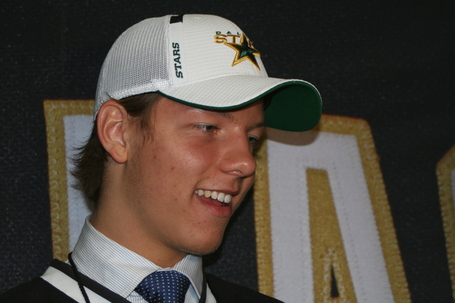 Alex Chiasson was the top pick for Parise as the new coach for Des Moines and he took the opportunity to learn from playing against the higher talent of the USHL. In his lone season at Des Moines he led the team with 17 goals and 33 assists and had a team-high -9 rating. It was a disappointing season for the Buccaneers, who finished with just 12 wins on the year.

"We had a rough season but at the same time I got to play against real good hockey players and you know my coach was J. P. Parise and he knows what it takes to make it to the next level and I had a chance to talk to Zach a couple of times. He made them such better hockey players in many different aspects."

He will now move on to play for one of the most prestigious hockey programs in America, Boston University, fresh of a national championship. As a Quebec native, the most common route for up and coming hockey players to play junior hockey in Canada before moving on to the NHL. Yet for Chiasson the opportunity to get a great education from a top college was just as important as furthering his hockey career.

"When a kid from Quebec chooses college over junior hockey, ya know.....it's cool. I'm an A student and I think school is important for yourself and it teaches you more than hockey and it gets you ready," Chiasson said. "So it's a balance in life and I just thought it was the best decision for me. I just felt it was the best pick for me. They just won the national championship and the way they play the game is close to how I play. It was just the best fit, it's close to home, it's amazing."

Yet the decision to choose BU over juniors had just as much to do with hockey as it did his education. Jack Parker, the third -winningest coach in NCAA history, is known for producing and developing future NHL stars including Tony Amonte, Ryan Whitney, Rick DiPietro, Jay Pandolfo and Keith Tkachuk.

"Coach Parker's job is to the guys ready for the next level," Chiasson said when asked about how long he might play at BU. "Anytime there's a guy leaving he's said he did what he had to do and he's kinda happy for me no matter what happens."

Chiasson is a is tall player who has yet to build the muscle needed to be consistent at the higher levels of hockey. He's eager to get started.

"I'm actually headed out to BU tomorrow, so I'll work out there," he said with determined look on his face. "Ya know I'm 6-3, 195 right now and to take it to the next level I need to get bigger, put on some pounds."

Chiasson is listed at 182 lbs, and it seems he's already started working on building up for college hockey.

Standing next to him however, it's easy to see he has the frame and potential to become a menacing physical player in a very short amount of time. He's known for his physical play (101 PIM in 56 games last season) but is also a highly skilled goal scorer and playmaker on the power play. When asked about his style of play and whether he would develop goal scoring skill over his physical play Chiasson breaks into a big, knowing smile.

"I think I'm going to keep both, I think that's what makes me a good hockey player. When I play physical, that's when I score goals. It's great to say, but that's where it is. I like to go hard and play physical. I think they [Dallas Stars] really liked my work ethic on the ice. I'm a power forward that really likes to go to the net and they really liked me a lot."

Talking with Chiasson, it's easy to see just how much he loves playing hockey and how much he's looking forward to working hard to develop into a better player than he is now. He's been known as the undisputed leader of every team he's played for and it shows in his demeanor and attitude. He's extremely confident without being arrogant, and he relishes the challenge of doing whatever it takes to make it to the NHL.

For now however, Chiasson is going to just appreciate being drafted.