2009 NHL Draft: Scott Glennie in his own words

Share All sharing options for: 2009 NHL Draft: Scott Glennie in his own words 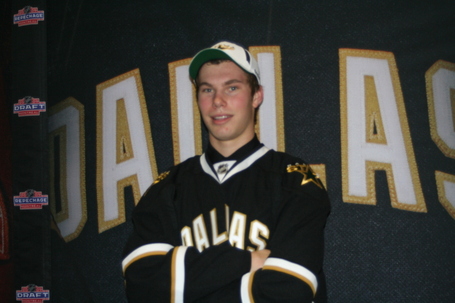 Here is what Glennie had to say after he was drafted:

It's a great feeling, I couldn't be happier for him [Brayden Schenn] to go to the L.A. Kings and at the same time he's feeling the same way for me. He's a firend of mine and has been a pleasure to play with for the past two years.

On whether he thought Dallas would draft him:

You know what, I didn't even meet with Dallas hardly at all. But I couldn't be happier that they picked me. Right now it just is a tremendous honor to be drafted by the Dallas Stars.

Talk about this past season, and how you proved people wrong that you were just feeding off of Brayden Schenn.

That's what people are saying about me a little bit but this year I definitely proved a lot of people wrong and that's why I was drafted eighth overall.

What player do you pattern yourself after:

More of a Jeff Carter type of player. He's got a good shot coming off the wing and has a good snap and uses his body to his advantage to lean into guys, and definitely a pretty intelligent player in the National Hockey League.

On who he's looking forward to playing with, especially player's like Mike Modano.

It's almost a surreal feeling to be playing with guys like that. You grew up watching them and they are tremendous hockey players, and I think that a lot of hard work and determination is going to get me hopefully playing with those guys pretty quickly.

On making the transition from Canada to Dallas:

It's weird. It's going to take a while to get used to it but at the same time it's a tremendous feeling to go down there and be putting in the same uniform as those guys and playing in Dallas, it's going to be great.

On this past season in the WHL.

The wheat Kings have only been good to me since I've been there. It's a great organization and it's going to be great for the city and fans to be hosting the Memorial Cup. And as a team I think we have to be looking at winning that and next year is going to be a great year for me and the rest of my teammates and fans.

On his style of play and why Dallas picked him:

Probably they think I'm a pure goal scorer and maybe they think that's what they need right now and I'm going to fit pretty well in that role up in Dallas.