Share All sharing options for: 2009 NHL Draft: Rest of first round open thread. 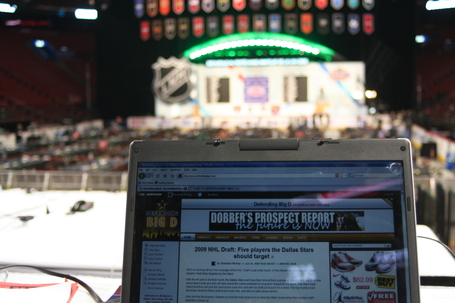 [UPDATE by Brandon Worley, 06/26/09 9:28 PM EDT ] RW Jordan Schroeder is falling. Many had him as a possible top ten pick, at least in the 10-14 area. Teams must be afraid of his size. It will be interesting to see just how far he falls.

The Stars threw a bit of curveball when they drafted Scott Glennie with the #8 pick, with Jared Cowen, Magnus Paajarvi-Svenssen and Dmitry Kulikov all available.

I'll have more on this later tonight, but my initial reaction is one of shock but also one of understanding. Glennie is a great player who is a dynamic playmaker, and could make a difference for this team sooner than later. He fills a desperate hole in the depth on the right wing in the Stars system, and he's a gritty and hard worker.

I'll have quotes from Glennie up later tonight. In the meantime, use this thread to discuss the rest of the first round.

The day has finally come. The first round will be tonight, with rounds 2-7 being held tomorrow. Live coverage starts at 7pm EST tonight on VERSUS, with pre and post-game shows on the NHL Network. I want to HIGHLY encourage those of you reading to jump in on the conversation and comment. I'll have my Twitter feed posted below, and if any major news happens I'll post an update below as well.

[UPDATE by Brandon Worley, 06/26/09 3:42 PM EDT ] I've talked to a couple of people here at the Bell Centre, and the consensus is that the rumor surrounding the Niskanen/8th overall pick for Tomas Kaberle was just that....a rumor.

[UPDATE by Brandon Worley, 06/26/09 4:59 PM EDT ] Jonas Gustavsson is reportedly still unsure of which team he will choose. In my opinion its between Toronto and Dallas, and the decision should be announced early next week.

[UPDATE by Brandon Worley, 06/26/09 5:29 PM EDT ] Dallas Stars staff are now out on the floor. I've been informed that DallasStars.com will be streaming live footage from the draft party. As soon as I have a link, I'll post it.

[UPDATE by Brandon Bibb, 6/26/09 6:16 PM EDT] Greg Logan of Newsday reports that the possiblity of the Isles passing on John Tavares and using their #1 pick to draft Matt Duchene of Brampton is very high.

I just learned that sources around the Colorado Avalanche at No. 3 are indicating a certainty that the Islanders are going to select Brampton center Matt Duchene. Considering how much No. 2 Tampa Bay wants Swedish defenseman Victor Hedman, the Avs are anxiously looking forward to high-scoring John Tavares falling to them.

[UPDATE by Brandon Worley, 06/26/09 6:36 PM EDT ] There were some more rumors going round a while ago that the Stars were now offering either Ondrej Roman or Pettru Lindgren and the 8th pick for Kaberle. At this point, it's all rumor and I think the only one that still has legs is the Phil Kessel to Toronto one. It's makes the most sense (sort of), and there's just too many guys here that are convinced it's going to happen. The Stars rumors seem to just be thought up out of thin air by radio guys.

[UPDATE by Brandon Worley, 06/26/09 6:57 PM EDT ] They have started to get things rolling here at the Bell Centre. They went through all the announcement of who would do the picking for each draft pick, and this place ERUPTED when they announced Montreal's.

[UPDATE by Brandon Worley, 06/26/09 7:59 PM EDT ] This is when things get interesting. Up until now things have gone about how everyone predicted. But depending on who Phoenix and Toronto go for, the Stars could have any number of top players fall into the lap. I'm expecting the Coyotes to pick Jared Cowen.

[UPDATE by Brandon Worley, 06/26/09 7:39 PM EDT ] So far, things are going about as planned. Tavares goes #1 overall to the Islanders, Hedman goes next to Tampa Bay and Duchene to Colorado. We just heard the official announcement that Anaheim has traded Chris Pronger to Philly for two players, two first round draft picks and a third rounder. Wow.