A Must-Read in Anybody's Draft Preparation

Share All sharing options for: A Must-Read in Anybody's Draft Preparation

Courtesy of Pension Plan Puppets' reader, daoust, who decided to do a little analysis of the draft going back to 1994.

Obviously, I've touted Bob McKenzie's list of the top draft prospects (just don't call it a mock draft, OK?) because it validated our pick of OEL. But I'm also about keeping an open mind.

Which is why from a Stars standpoint, this may be the most surprising thing to come out of daoust's analysis.

I love the Schenn.   He’s going to be an unstoppable force on the Leafs for another 15, maybe 30 years. My daughter’s first Jersey will have Schenn on the back.  But recent history would indicate that if you’re looking for a bona fide stud defenceman, you’re not likely to find him in the top 10, although you will likely get yourself a very serviceable NHL-er.  Here are all of the D-men drafted in the top 10 since 1994: 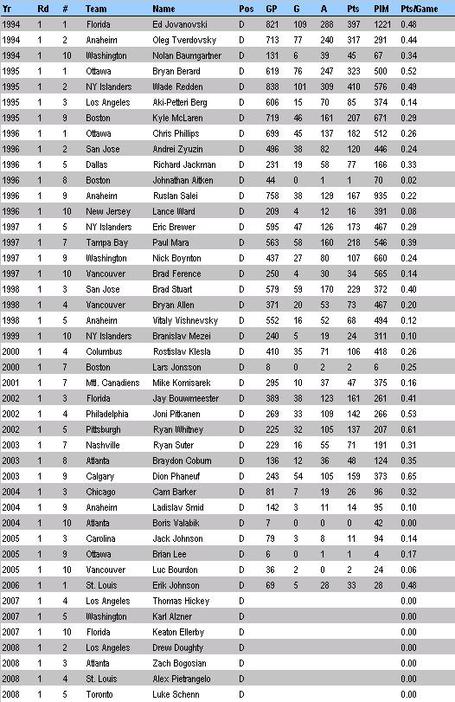 Daoust points out that Chris Pronger and Scott Niedermayer were both Top 5 picks in the drafts prior to 1995. But Nicklas Lidstrom was a third round selection by the Red WIngs in 1989 and Sergei Zubov was a fifth round draft pick in 1990 by the New York Rangers.

I realize there are certain factors that scouts simply can't measure in a prospect, such as having an almost instinctual ability to read the game the way Lidstrom and Zubov can. And even if you're drafting a highly skilled defenseman, you can't possibly expect their ceiling to hit above the 0.70 point per game mark that Lidstrom and Zubov have both been above in their careers.

As such, I'm not going to hold the players on that list to a ridiculous standard.

And on a side note, don't even get me started on the fact that Zubie's only been nominated for the Norris Trophy just once in his career. I don't know that that's been due to East Coast Bias amongst the hockey writers.

But it's not right.

Getting back on track, I do think the 0.49 point per game level is not out of the realm of expectation. Yet surprisingly, only five defensemen on this list have either met that mark or surpassed it. Bryan Berard and Wade Redden are the first two names on this list. They were also the first two players chosen in the 1995 draft.

After that, you have to go to the 2002 draft before you get to the next two defensemen to meet the mark (Joni Pitkanen of the Philadelphia Flyers and Ryan Whitney then of the Pittsburgh Penguins). Dion Phaneuf from the draft class of 2003 rounds out this list.

Now you could look at this two ways.

First, you could look at the long term history of these top 10 picks and determine the Stars would be better off picking somebody like Jared Cowen (if he's available) or a skilled forward instead of OEL.

In case you're wondering about the recent draft history of the #8 position...