Our series of top draft prospect profiles continues this afternoon with a look at Windsor Spitfires defenseman Ryan Ellis. You can find all of our coverage of the 2009 NHL Draft here. Defending Big D will be in Montreal starting Thursday providing extensive live coverage of the draft. 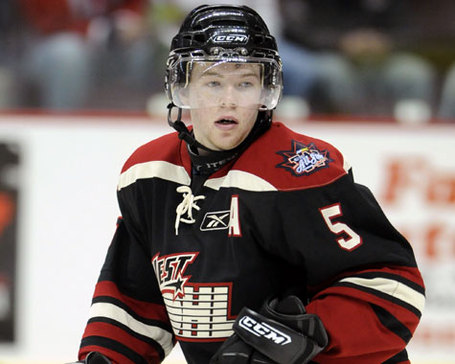 Why the Stars would want him:

Ryan Ellis enters this weekend as perhaps the most exciting defenseman prospect in the draft. His numbers during his time with Windsor of the OHL are astronomical, and many believe he is the best offensively talented blue-liner available. He has an incredible slapshot and great vision; Ellis has pretty much defined the term "power play quarterback" during his time in the juniors. His vision and perfect transitional passes were the catalyst for the high scoring Spitfires. Yet despite his billing as a power play killer, he was also extremely effective in 5 on 5 play as his incredible +57 rating attests.

For a Stars system that is hurting for offensively minded defensemen, Ellis would instantly bolster the depth the Stars lack at the position. There are many that think that Ellis could make the transition to the NHL sooner than later, especially with his hockey I.Q. and intelligence, what many believe to be his greatest asset.

Many scouts would instantly point to his lack of size. At 5-10 and 173 pounds, Ellis would desperately need to put on muscle mass before trying to make the move to the NHL. He would be facing forwards that are much bigger than he is, in a league that much more physical than the OHL. Yet his size is not his only drawback that has made some scouts question whether he can make it in the NHL.

Ellis lacks speed and has just average skating ability, a skill that is needed in a player of his size. And while he isn't afraid to take a hit, there are some who believe that Ellis' defensive zone skills is way behind that of his offense. He lacks the speed and size to effectively make playes along the boards or in front of the net, and it's questionable whether he would be able to improve enough to become successful at the next level.

"He's a really smart, heady defenseman. His puck movement is excellent and the way he moves the puck around the zone is excellent. He's a real high-end offensive guy. He's got a great shot and he gets it through to the net. A lot of guys have their shots blocked, but he's got a real knack for getting it through, and that leads to a lot of tip-in and rebound goals. He's a smaller guy, but he's not afraid of taking the body. He shows no fear of getting involved in scrums, he's not intimidated."

"Yes, he's just 5-9, lacks blazing wheels and is not a very good defender. But you cannot ignore type of poise and native hockey instinct that is rare in 10 year pros, much less 18-year-olds. His off-the-charts hockey sense is the best of anyone, at any position, in this draft. Also one of the best PP quarterbacks to come along in the past five years, and despite his lack of size can absolutely rip a cannon point shot."

Coming Down the Pipe!: On the Fence With Ryan Ellis

To me, the combination of undersized and average speed is an absolute killer. To play defence at the NHL level you can be small but then you’d better be fast and the fact that Ellis is neither of those things is a big red flag to me. One scout suggested he wouldn’t be able to play the same puck rushing style that he does in junior because he couldn’t get back to his own end fast enough if something went wrong. So if he’s not going to be the same style of pro as he is a junior… what will he be?

The common refrain heard throughout the league is that if Ellis was just three inches taller, he'd be a sure-fire top-five selection. Unfortunately, in many ways, the NHL is a big man's league and Ellis' dynamic power-play quarterbacking abilities and offensive production may be overshadowed by his lack of height. Ellis has an outstanding shot from the point and is consistently able to jump-start the offense with a well-timed pass or breakout through the defensive zone. He has also worked on his defensive abilities (leading the team at plus-52) and has drawn praise for his effort and leadership.

In his own words- Ryan Ellis; NHL.com prospect profile

On his style of play: I'm an offensive defenseman for sure. I'm undersized. People kind of think I'm a little smaller for a defensive game, but I think I try to be responsible in my own end as well as sometimes lead the rush and try to chip in offensively as much as I can. I'm a power-play kind of guy. I like to get out there and get a few points here and there. Other than that, I think I just try to be a well-rounded defenseman.

On patterning his game: It's Brian Rafalski for the most part and a little bit of Kris Russell, who is in Columbus. I think both are undersized guys and are a little underrated too. They don't get the justice for how good they really are for being undersized. I think they're great puck-moving defensemen, very poised and calm with the puck. They have a lot of offensive upside as well. I think that makes them that much better than the rest of the defensemen there.

On being told he’s too small and using it as motivation: I've got that most of my career. I'm still getting it nowadays. It's not an issue. I don't find a problem with being undersized. I think there have been a lot of players who have been undersized in the last few years that have been drafted high. I think it's not an issue with any players these days, especially the rules and how they're made to fit players like my size. And I think it just motivates me knowing that people think I can't do it and hopefully one day I'll prove them wrong.