We continue our profiles of the top prospects in the draft, this time looking at RW Jordan Schroeder from the University of Minnesota. You find all of our coverage of the 2009 NHL Draft here. Don't forget, Defending Big D will be headed to the draft to provide extensive live coverage starting Thursday in Montreal. 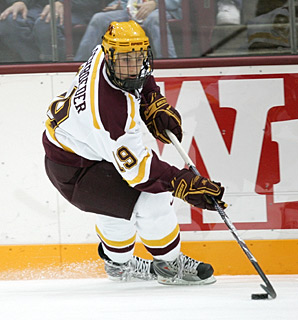 Follow the jump for in depth analysis of Schroeder, scouting reports and quotes from his coach in Minnesota.

Why the Stars would want him:

Jordan Schroeder enters the draft as the most hyped American player, and one of the most dynamic forwards in North America. His playmaking ability, stick handling, incredible snap shot and hockey intelligence make him perhaps a player that will make the jump to the NHL exceptionally fast, perhaps as soon as next season. He skyrocketed up the ranks of the US National Development Teams and worked hard to graduate high school early, in order to play at the University of Minnesota as soon as possible. He has incredible work ethic and is always working to improve his play.

Most importantly he is a highly skilled right-handed right-winger, something the Dallas Stars have precious few of (none). He would immediately help to balance a roster that is looking to amp up the offense next season under new coach Marc Crawford, and his playmaking and passing ability would perfectly complement the type of play Crawford is hoping to promote.

He led the US U-18 team in scoring and was the top freshman scorer in the NCAA this past season at Minnesota. He was named the conference and national rookie of the year by several publications as well.

His hard working, energetic yet skilled style of play is perhaps the exact type of player that Joe Nieuwendyk would love to see on his team, a guy that that comes from the same mold as himself. He's a discliplined, high-character hockey player who makes the big plays at the times when his team needs him most.

Because of his size (5-8,175), it's possible that Schroeder won't go until the 10-14 spots. It's been the same thing for Schroeder his entire career however, hearing how he is too small and too young. Yet he continues to excel and to improve at each level of hockey he plays.

He also must learn to shoot more. Despite having an incredible snap shot, he looks to pass too often and doesn't show trust in his shot as much as he should. At the NHL level, he will need to learn that putting the puck on net is sometimes more important than making the pretty cross-ice pass.

He still has time to grow and put on wieght, and his skill level should negate the qualms some teams might have about his size. He wouldn't be the first small forward to become a playmaker in the NHL, and wouldn't even be the first on the Dallas Stars to do so.

What they're saying about Jordan Schroeder:

Despite concerns about his lack of size, Schroeder may be one of the most "NHL ready" picks in the draft. Numerous times in his career, he's been thrown into situations against bigger, older competition, and every time, he's found ways to adapt and to score points. There's no reason he shouldn't do the same in the NHL, even though he's only 5'9". Schroeder will likely go in the 5-10 range in the Draft and should be a great pick for a team that is really hoping to improve their offense.

"He’s a dynamic player, a leader and a type of player that has developed into a complete offensive and defensive threat every time he is on the ice. He has a rocket of a wrist shot and he can beat you by putting the puck in the net, going around a defender, or freezing the goaltender and passing it off to one of his wingers. The concern is going to be his overall size, like there was with Scott Gomez, with Brian Gionta and with Patrick Kane, but at the same age he is probably a little thicker and a little bit more compact than they were. He’s a great hockey player."

Strengths: "Jordan has a good strong base where he’s hard to knock off the puck. Quickness is not an issue for him. He’s a strong skater and has real good speed. He’s a thick kid. Jordan isn’t six-feet tall, but he’s thick. He’s strong physically throughout his body. He’s got what you’d call a good hockey body. He has a very heavy shot. He has elite hands and as heavy a shot as we have on our team. He can beat a goalie from far out."

Overall: "He’s got the whole package. He’s been an elite player for three years now, but I think he will continue to become a better player at every facet of the game. He has an exceptional head for the game. His hockey sense is elite -- he has that great, great hockey sense. He’s extremely motivated and he wants to be a take-charge guy."

At 5’9/180, Schroeder isnt' the biggest freshman in stature, but he may be the most complete. Schroeder is a highly intelligent player that thinks and understands the game exceedingly well. He possesses excellent vision, awareness, and knows where plays will end up. He is instinctive and creative. Schroeder has the ability to make players around him better and his infectious enthusiasm and passion for the game is difficult to miss.

Schroeder is an excellent skater with tremendous speed who is also very good in transition. He is versatile in that he can play both center and wing equally well. He is a superb playmaker with passing skills that are among the best in college hockey today. One aspect that sets him apart from many collegiate rookies is his great patience and poise with the puck.

On his style of play: Definitely, my strengths are seeing the ice, being able to make plays, set up people for some goals. But when I do get the opportunity to score, I think I can bear down and put it in the back of the net. On patterning his game after an NHL player: I don't really look at that too closely. But if I had to pick someone, it would be more like Pierre Marc Bouchard from the Wild, kind of a faster, playmaking forward, or Marc Savard or Nicklas Backstrom from the Capitals.

Schroeder scoring a goal for the US team.