Share All sharing options for: With the 8th selection in the 2009 SBN Mock NHL Draft...

With the 8th selection in the 2009 SB Nation Mock NHL Draft the Dallas Stars select, from Leksand IF of the HockeyAllsvenskan Swedish League.... 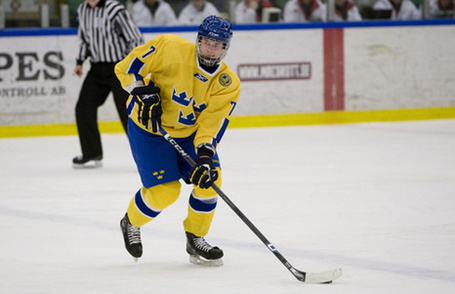 It's amazing that OEL fell this far. His draft stock has been skyrocketing the past few months, and there are some scouts that are convinced he has a chance to go in the top five in the draft. Los Angeles, Atlanta and the Islanders have all shown interest in Ekman-Larsson, either of those teams in front of Dallas (most likely not New York, however) could certainly use a player with his potential.

Potential is the key word when evaluating OEL. He's just 17 years old, and most like won't play in the NHL for at least another year. But his potential to be a dominating defenseman in the NHL is so high, teams are more than willing to use a high pick on him to secure him for the near future.

What exactly is his potential? Follow the jump to find out.

There are profiles out there comparing him to Nicklas Lidstrom, Mattias Ohlund and Sergei Zubov. His offensive ability is out of this world for a defenseman his age. His vision of the ice and the players around him have made him into one of the best "quarterbacking" defenseman in the world. His seeing-eye wrist shot has a knack for finding its way through traffic. But perhaps its his combination of incredible puck-handling skills and skating ability that him so very dangerous. Ekman-Larsson makes defenses crazy. Plain and simple. He is near impossible to bump off the puck and he has the ability to skate circles around the opposition while stick-handling his way through traffic. His lateral movement is exceptional and he has that "puck on a rope" skill that makes him one especially dangerous on the powerplay.

[UPDATED] He's not just a one-trick pony, however. OEL is also very capable defensively, and led his Swedish Elite league (second tier) in +/- (+44) last season. As a disclaimer, and in response to some comments below he did have just a +2 rating playing against higher competition in the higher Swedish Elite league.

He is a relatively physical player (which is rare for the European leagues, which plays a different style than North American hockey) who has been known to lay out an crushing hit on occasion. He has tremendous defensive instincts and uses his hockey intelligence as well as his physical talents together to form a formidable force in his own zone.

What does the future hold (if the Stars do indeed pick OEL)? For one, he's going to need another year at least in Sweden, or the AHL, before making the transition to the NHL. He doesn't turn 18 until July, and he needs to add some bulk and weight before he can realize his full potential. But he has all the ability to become a franchise defenseman for whichever team is lucky enough to have him fall in their laps.

How did we come to make this pick?

When the draft picks started to roll in, one player's name failed to be called: Magnus Svensson-Pääjärvi. This chance that such a highly touted, extremely skilled winger could basically fall into the laps of the Stars was incredible. Even though the Stars need defenseman in their system, when a player with MSP's abilities become available to you, you don't hesitate and you make that pick. Alas, Toronto nabbed him at #7.

So now we were left to decide who should be at the top of the draft board of the players available. My instincts immediately set my eyes on Ekman-Larsson, who I had been watching fall through the first seven picks as well. Yet there were still some other choices to sift through, and it wasn't an easy decision.

When you sit this high in the draft, you absolutely cannot pick solely for need. You pick the most talented, highest rated player on your draft board no matter what his position might be. We narrowed down our choices to OEL, Dmitry Kulikov and Jordan Schroeder. Schroeder would fill an instant need for the Stars at right wing, and his offensive ability, grit and work ethic would make him a very fast riser in the system. But his size (5'8") is a concern and we felt that he wasn't on the same level talent-wise as Kulikov and OEL.

So now the Dmitry Kulikov/Oliver Ekman-Larsson debate raged. Both are highly skilled defenseman who have to become #1 defenseman at the NHL level in the near future. Kulikov is possibly closer to playing in the NHL than OEL since he has already made the transition from Russia to North America, playing in the QMJHL this past season. He has also posted incredible numbers in that time span.

But when thinking about long-term potential, and who had the ability to become the next great top defenseman for the Dallas Stars; Ekman-Larsson's character, intelligence and incredible skill made it apparent that he was the right pick.