[Editor's note by Brandon Worley: The firing of Dave Tippett and the hiring of Marc Crawford has understandably derailed us a bit from our coverage of the upcoming 2009 NHL Draft, being held June 26-27. We'll do our best to catch up, starting with Brandon's profile of defensive prospect Jared Cowen] 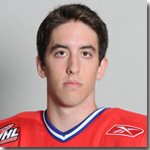 Team: Spokane Chiefs of the WHL

Why the Stars Would Want Him:

Cowen's size, for one. And scouting reports indicate he's very mobile for his size and has a long reach. In the past few seasons, he's added a little offense to his game, as well.

Here's one such offensive highlight that I pulled off of YouTube:

Has been compared to former Dallas Stars defenseman Derian Hatcher and Adam Foote, who patrolled the blue line for many years in Colorado when Marc Crawford was coach there.

His 2008-09 season was cut short by a knee injury on February 2nd in a game against the Chilliwack Bruins. An opponent fell on the back on Cowen's left leg after the big defenseman finished a check, which damaged Cowen's medial collateral and anterior cruciate ligament.

Here is what Wrap Around Curl from Pension Plan Puppets has to say about Cowen:

I know everyone is freaking about his knee injury but the kid is tough. Really. I am fairly certain this is the only time he has been injured as a Chief. What I love about Cowen is you always know when its his shift. I know he is rather large and hard to miss but he makes his presence known. His defensive partner was Jared Spurgeon (5'9, 170lbs.) and they were the wrecking crew and the go to shut down boys on the penalty kill. Oh and Cowen is fiercly protective of goalies. I think I have only see him fight once but that was when someone decided to plow into Dustin Tokarski. I've never seen someone drop gloves that fast. It was over in about 30 seconds but Cowen devastated the player who decided to mess with his goalie.

Cow Cow also brings leadership to the team which became clear once he was injured and then the Chiefs had the Great Injury/Suspension Meltdown of 2009. I'd see Cowen at game sitting either in the press box or down in the seats but he cared about the game taking place. There were times I'd see him in utter agony over the game taking place while the other healthy scratches or injured messed with their cell phones and talked to their girlfriends during intermission.

Recall that after Hatcher signed with Detroit in the summer of 2003, he suffered a knee injury in his first season in the Motor City and was never the same after that.