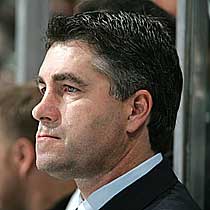 Because I have to confirm these things through direct sources, and because Dave Tippett is not returning phone calls, that's all I can say at this time. I do not have official confirmation yet.

TSN is reporting that the Stars have fired head coach Dave Tippett, another surprising move by the team that came out of nowhere. The report also says that the Stars have sought permission to talk to Marc Crawford, who is still under contract by the LA Kings.

[Quick disclaimer: As Brandon noted in his FanPost, Mike Heika of the DMN has yet to confirm TSN's report, since the team nor Tippett won't return his phone calls. It's also not yet on the team's website either. I believe TSN isn't wrong in their report, but I do find it interesting they have yet to acknowledge the firing either. Perhaps they feel confident that Marc Crawford will be hired, and want to announce both at the same time. We'll continue to follow this story as it develops, and as soon as we have confirmation from the team then we'll start to break down exactly why Tippett was fired and where the Stars should go from here..]

If the Stars are looking for a change in atmosphere and a new direction for this team, a coaching change (along with a G.M. change) is the quickest way to make that happen. It's a lot easier and faster to bring in a new coach, than it is to change a roster around.

A couple of months ago we discussed how much blame was on Dave Tippett's shoulders for the failures of this past season, and I argued that while there were a number of injuries that weren't his fault there was still some glaring issues that could be placed on the coach's shoulders. Yet despite the problems of this past season, I was more than willing to give Tippett one more shot to get things going in the right direction, especially with all of his star players healthy. With a new G.M. in place he was going to be on a very tight leash and another slow start would have had him fired fairly quickly.

Yet the Dallas Stars are definitely focusing on changing things up from the status quo of the past seven seasons, starting with the hiring of a brand new, never been used General Manager. Joe Nieuwendyk was not hired to just see what he could do with the team as is; his job is to assess the organization and make the changes he feels necessary in order to build what he believes to be a winning team. While Dave Tippett has helmed one of the most successful regular season teams in his tenure, the consistent playoff failures (just three playoff series wins, coming in two different postseason trips) have been the most glaring issue with the Stars since 2000. While it's easy to say this is a successful team even if the Stars don't make in to the Conference Finals each year is easy, but the truth remains that expectations for the Stars are high and disappointment does not bode well for a head coach.

That's why I think it's unfair to say this firing was about punishment for the disappointing season of 2008-09. We certainly can't blame Tippett for all of the injuries and I doubt that Nieuwendyk does either. Yet when you look at the entire body of work a coach has had with his team, you get the feeling that Nieuwendyk felt that change was neccessary since there weren't any guarauntees that Tippett and the Stars would have finished any differently with a healthy team than they did five of the last six seasons.

You will never find a nice guy than Dave Tippett, and I feel bad that he is the victim of the team changing things up for the sake of change. But he won't be unemployed long and I'm certain he will be wildly successful wherever he ends up.

Now onto the rumors about Marc Crawford. I'll go into this in much more detail if in fact he is hired, but Crawford is a guy I can see having success with the Stars and the players already in place. He helped build the Avalanche into perennial contender in the 90's, and was there with the Vancouver Canucks as they began their rebuilding process into a very successful team a few years ago. His time with the Kings did not go so well, but not many coaches have had success there lately either. He is known for combining explosive offense with solid defense, which is the direction I see Nieuwendyk wanting to take this team in the next few seasons (and one that Les Jackson had already set the Stars up for). Of all the available coaches, I couldn't fault the Stars for wanting Crawford.

That being said, while it's easy to say Crawford is the best of the available bunch it's certainly not easy to say he's a step up from the coach he would be replacing. Dave Tippett has the second best winning percentage in the NHL over the past six seasons, and that is going to be tough to live up to.

If Crawford turns down the job, I'd expect for the Stars to shake the Guy Carbonneau tree. It would be a huge boost for fans and while I think he would be a coach that would immediately command the respect of the team, Crawford's track record is more impressive than Carbonneau's. Choose the right coach based on ability, not nostalgia.