Today we kick off our coverage of the 2009 NHL Draft with as fairly extensive a preview as I can muster.  From now until the draft (June 26-27, full coverage on VERSUS) we'll keep our eye on various mock drafts, profile the top prospects and try our best to put together what we believe is the best plan for the Stars heading into the draft.

For the first time in over ten years the Dallas Stars have a top ten draft pick, currently possessing the 8th overall pick in the 2009 entry level draft. While the complete draft order has yet to be determined, we do know the Stars have the following picks:

*There are two conditional picks in the seventh round that have yet to be determined, both involving the Stars.

In his draft primer yesterday, Mike Heika covers the main issues for the Stars heading into the draft, and talked to Les Jackson about the team's options. He brings up the interesting question about how much influence Joe Nieuwendyk will actually have in the draft, especially since Jackson has done 99% of the work and planning up to this point. This is an interesting situation for the Stars to be in, since normally a team's former-General Manager is not usually still with the organization during the draft and calling the shots on each pick. But Jackson has been working closely up until now with director of amateur scouting Tim Bernhardt, and Nieuwendyk has the advantage of easing into the job a bit without the extreme pressure of putting together an extremely important draft just weeks into his tenure. Of course as the General Manager, it will be Nieunwendyk's fault if this draft is deemed a failure a few years from now.

Heika was able to talk with Jackson about the team's strategy:

Here's Jackson on the thought process of moving up:

``Honestly, I don't see us having what it would take to move into the top three, so my first impulse is to say we would wait and believe we'll get a pretty good player at No. 8.''

And on moving down:

``That's a bit of a dangerous game. If you like a player and that player is available where you are, I think you take him. It's really tough to predict what these teams around you are going to do.''

Because of that, Jackson, Bernhardt and the scouts are putting together their draft board and will probably follow it to a tee. As such, they will rank the players and then react to what happens in front of them.

Heika notes that this could be a very interesting and/or frustrating strategy to fans, especially if the Stars are determined to stick to their draft board and pick the best player available. What would make this such a debatable draft is if Magnus Paajarvi-Svensson fell to number 8, a skilled left-handed left-winger who most imagine could go in the 3-6 spots but could fall. Left-handed left-winger? The Stars have plenty of those already, but Jackson says that's a possibility if he is the BPA according to their draft board.

``There are ways to work those things out,'' he said. ``I've always been a fan of getting the best player, because then you really can use those assets down the road and go out and get a player who might be an immediate fit.''

That said, he agreed when asked if picking this high (the highest the Stars have selected since 1996) allows a team to select for need.

``I think when you see a lot more kids entering the league at 18 or 19, that, sure, you can say a player selected this high has the chance to help your parent team more quickly,'' he said. ``So, if you want to make that argument, I can agree that you would be tempted more to change your philosophy and take someone who fits what you might need in your organization.''

Of course, this all depends on what the Stars' draft board looks like. But the big test, in my opinion, is just how Nieuwendyk works with Jackson and Bernhardt, and just how much influence he'll have on the top pick. He IS the General Manager after all, and this pick could be his signature move to start to mold the Stars into what he believes to be a successful team.

Follow the jump for the rest of the draft preview, including a list of the top 30 prospects and several mock drafts.

Here are the top prospects in the draft, ranked according to an average between several media sources. 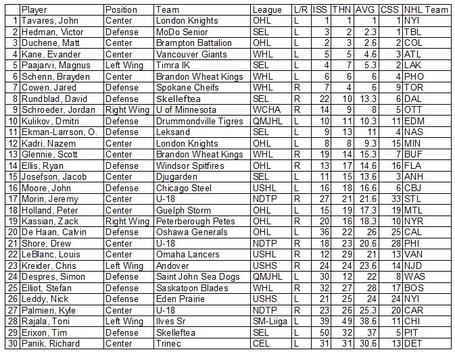 NHLdraftnotes.com has a good list of prospects from the Western Hockey league as well, complete with scouting reports and grades.

MyNHLDraft.com has a constantly updating mock draft, with the Stars making the following selection:

The Western College Hockey Blog also has a mock draft up:

Why: The Stars are in rebuilding mode for the first time in a long while, and could go in any number of ways. Glennie is probably the best player available in this position.

Hmm. Not so sure I agree with the statement that the Stars are in rebuilding mode.

So, four different mock drafts and four completely different opinions on how the Stars will pick. This should get interesting.

Finally, here are some good links for draft coverage:

Some NHL.com experts don't agree on who should be the number one pick.

NHL.com's coverage of the combine.

Full coverage of the combine day one and day two.