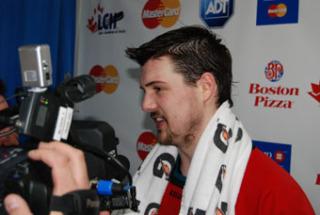 I've seen several questions asking about the Memorial Cup, specifically what it is and how we can see the remaining games. Here's an rundown on the info:

Here are the standings so far in the tournament, after two games of round-robin play.

With last night's 6-4 win over Drummondville, the Rockets are automatically assured a spot in the Memorial Cup title game on Sunday. They complete round-robin play tonight against Windsor.

Just as a reminder, Jamie Benn scored 4 goals and had an assist in last night's win.

Mark Stepneski from Andrew's Dallas Stars Page has some quotes from Jamie Benn and his teammates, who appeared on AM 1150 in Kelowna after the win:

Asked on AM 1150 Kelowna postgame show if this was his best game ever, considering it was the Memorial Cup, Benn was seemed to think it might be.

"I think so," he said. "It's just one of those games where everything is going your way. I've got to give a lot of credit to my teammates. They helped me."

"I am not even surprised," Rockets defenseman Tyson Barrie told AM 1150 Kelowna. "We saw it all the time back in Kelowna. He's an explosive guy. He's a tremendous player and you saw it tonight that he can make things happen on his own."

"It's a pretty exciting time for our team, but tomorrow is still a big task," Benn said. "Tomorrow is a big game just for momentum. We want to win every game, but getting to the Memorial Cup final is pretty special."

Be sure to head over to ADSP to hear the entire interview from Benn.

Here's the rest of the schedule for the tournament:

I'll be putting up an open thread for tonight's game and the championship game on Sunday. This is a great chance to see future Dallas Star Jamie Benn prove what he is capable of, on one of the biggest stages in Canada.