Share All sharing options for: Friday Favorites: The Dark Tower 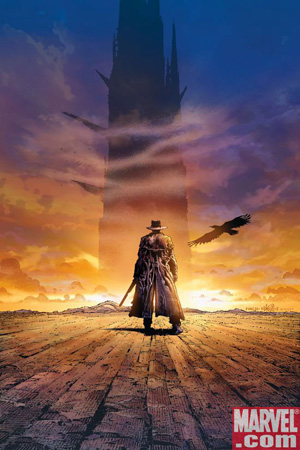 I am a geek, albeit a sports loving geek. I am a huge film buff (and find satisfaction in every genre of movies), I have a soft spot for smart science-fiction fare (Battlestar Gallactica is the best TV show ever) and I absolutely love to read good books. My favorite author, by far, is Stephen King.

While the majority of the novel-buying public buys up King's books, reads them and moves on, the die-hard King fans revel in how he has constructed a stand alone universe the he has fleshed out with incredible characters, places and folklore. In this universe, he has managed to tie nearly every single one of his books together and I have spent thousands of hours reading these stories over and over finding clues on how they might be connected.

At the center of King's universe is Roland the Gunslinger and The Dark Tower. It's his massive, genius opus and one that took nearly three decades for him to finally finish and it all started with single sentence:

The man in black fled across the desert, and the gunslinger followed.

Thus began a story that was influenced by Robert Browning's epic poem "Childe Roland to the Dark Tower Came." King starts off his seven-novel series with a simplistic tale of the gunslinger in the land, chasing a mysterious figure across a desert in a land thousands of years moved on after a nuclear apocalypse. We learn the story of how Roland was tricked as a child to challenge his teacher to the final test of an apprentice and how his singular purpose in life is to make his way, somehow, to the Dark Tower where he alone holds the key to saving all of existence from disaster. Along the way, he will eventually sacrifice anyone he holds dear in order to reach his destination.

With each novel, King paints an exponentially complex picture of the world Roland occupies. We learn how the universe the gunslinger is trying to save is connected to nearly every aspect of existence in Stephen King's library of books. We come to know and love Eddie, Susannah, Jake and Oy. We see Roland grow from a lonely, perpetually heartbroken cowboy into one of the most tragic figures in all of literature.

I am constantly amazed by how much this epic story affects me, no matter how many times I read it. This story has it all: science fiction, horror, action, tragedy, drama, mystery and romance. While there are some that were unhappy with how King ended the story, I found it perfect.

About two years ago, Stephen King sold the movie rights to the Dark Tower series to JJ Abrams and Damon Lindelof, the duo behind Lost, Cloverfield and the new Star Trek. This past week, Abrams has said that he is still planning on directing a film adaptation of the series but will wait until Lost has finished.

While reading this series, one can't help but imagine what these stories would be like on screen. The titular role of Roland of Gilead seems like it was custom made for Clint Eastwood. Yet, the logistics of putting such a large-scale story on screen is much easier said than done. It was close to becoming a T.V. miniseries in the early Nineties but thankfully that fell apart. Honestly, I feel the best method of bringing the story to film would be a three year series on HBO, although it the budget would likely be unmanageable.

Movie franchises such as Lord of the Rings and Harry Potter have opened the door for movies like the Dark Tower to be made. If Star Trek explodes at the box office, then Abrams should be able to secure a multi-picture studio deal, one that would give him the financial freedom to do this story justice. Technology and CGI has now progressed to the point where I feel confident that the world of Gilead and Mid-World can faithfully be presented on the big screen.

Now I just have to find a way to wait about four more years for the first movie to be made.