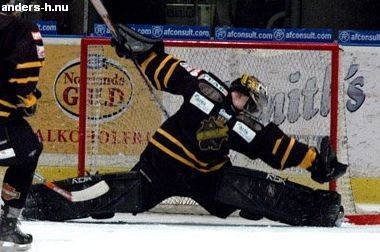 Mike Heika has a very interesting post up this morning with the news that the Stars are in serious talks to sign Swedish goaltender Jonas Gustavsson.

This follows the same course the Stars took last season when wooing Fabian Brunnstrom. Right now Gustavsson has stated his decision is between two teams, Toronto and Dallas, and that the Maple Leafs have the inside track so far. For a guy who states that he just wants to go to a team for a chance to become the number one goalie next season, Toronto would seem to be the logical choice.

Yet the Stars are making a heavy bid for his services with Dallas scout Johan Garpenlov basically living in Sweden the past few weeks, and both Tim Bernhardt (Stars director amateur scouting) and Andy Moog both traveling overseas to see Gustavsson as well. With Marty Turco facing the final year of his contract with the Stars, and the team in dire need of the Next Big Thing, the Stars could be a smart choice for Gustavsson as well.

Since he is not eligible for the entry draft, Gustavsson can choose who he plays for in the NHL, yet is still limited to maximum salary of $900,000. So expect any contract to be laden with incentives, just like Brunnstrom's is.

Follow the jump for more news and notes on the Dallas Stars.

Mark Stepneski takes a look at the impact of injuries in the Western conference. While the Stars are tied for third in the league in man-games lost to injury, it's arguable that it's the actual players lost that has had the biggest impact and not total games. Yet, the St. Louis Blues are the hardest hit team in the league and are still fighting for a playoff spot.

Guess that goes to show what a dominating goaltender can do for a team on the brink.

JJT says there's no way Mike Modano doesn't return next season. For once, I actually agree with the man.

Ivan Vishnevskiy is looking at making a big impression late this season in a bid to make the jump full time to the NHL next season.

A couple of mock drafts from NHL.com, courtesy of East coast and West coast scouts.