There's no doubting that the Dallas Stars have mucked up the backup goaltender situation this season. The inability of the Stars' coaches to have any faith in their second goalie led to Marty Turco starting 73 of 80 games this season, including a franchise record 32 straight games between December and February. While Turco claimed he played better and more focused when tired, he declining play in late February and March were one of the contributing factors to the Stars missing the playoffs.

The Stars entered the season with Tobias Stephan as their main backup in net, and lacked another option at the AHL level. The only goalie prospects below Stephan all played at the ECHL level or lower, and it wasn't until late September that the Stars finally secured an AHL goaltender when they signed veteran Brent Krahn.

Stephan struggled for much of the season when he was given a chance to start, although stated he plays best when getting into a multi game rhythm. With the Stars clearly out of the playoff race and just a handful of games remaining, the team decided to give one of their up and coming young goalies a shot to prove himself when Marty Turco became doubtful with a lower-body injury.

Matt Climie was recalled on an emergency basis last week before the home finale against St. Louis. While there were some bumpy spots along the way, in just two games Climie perhaps gave the Stars organization a feeling that their goaltending situation isn't as dire as it seemed just a few weeks ago.

Matt Climie hails from Leduc, Alberta, a small suburb south of Edmonton. Attending college at Bemidji State University in Minnesota, he set a school record for career shutouts (12) and is second all-time at BSU in career goals against average (2.40) and save percentage (.910).

Undrafted out of college, Climie was signed as a free agent with the Dallas Stars in 2008. He was immediately assigned to the Iowa Stars of the AHL to get some experience before the season ended. Climie struggled in six games, posting a 3.99 GAA and going just 1-4-1, yet it was sure to be valuable experience moving forward. His potential was evident in the summer of 2008 when he led the Dallas Stars to a Prospects Tournament win, going 2-0 in the process. 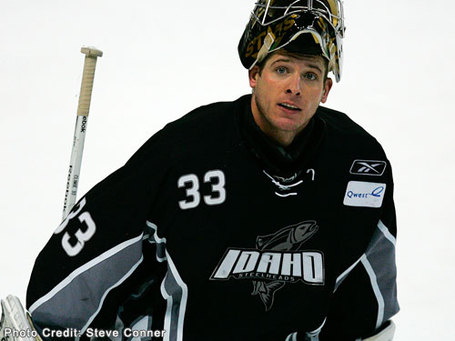 With the Stars lacking an AHL affiliate for the 2008-2009 season, the decision was made to let Climie get a year's experience at the ECHL level with the Idaho Steelheads. He was in the top five of every goaltending category in the ECHL, posting a 2.30 GAA and a .915 save percentage.

So that's brings us to last week, when Climie received the call that he would be suiting up for the NHL the next night. To say it was unknown how he would play in front of the Dallas Stars home crowd would be an understatement of sizeable proportions. While succesful in college and and the ECHL, Climie was never dominating and had struggled mightily during his short time in the AHL. Facing the red-hot St. Louis Blues who were fighting for the life of their season and the last playoff spot in the West, Climie was better than expected despite a few hiccups.

Climie is a large (6-3,190) yet athletic goalie, and is adept at moving laterally and and has better than average reflexes. He also has trouble corraling rebounds and controlling the puck off his body. All of these attributes were evident against the Blues, in which Climie allowed four goals yet made the big stops when needed en route to his first NHL win. 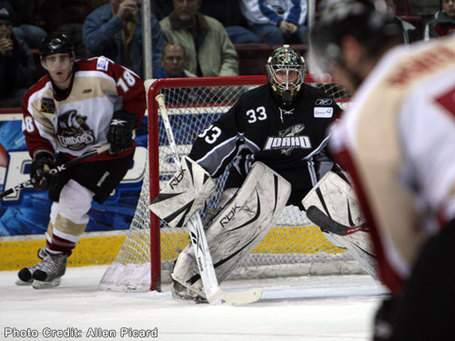 Two goals allowed were deft deflections that found holes through Climie, who had found the puck through traffic but wasn't able to react in time to the tips. Another goal he was screened directly in front and never saw the shot that got by him. It was the fourth goal of the game that showed his biggest weakness, however.

Climie is an eager, confident and at times over-zealous goaltender. In his two games with the Stars, Climie showed a tendency to overcommit at times to his left or right. This was what gave David Backes the opening on his glove side, which he promptly painted on the far side for the go-ahead goal.

Yet Climie was able to keep his team in the game and secure the comeback with several big saves in the third period. His confidence was still there, yet he was able to calm down and temper his aggressiveness.

While the Stars weren't as fortunate in their game against the Wild, Climie showed much more poise and control in his second start. He confidently played the puck and made several scrambling, athletic stops and did his best to keep the Stars within reach of the Wild. All three goals allowed can be directly attributed to defensive breakdowns, especially during the penalty kill.

Climie is unafraid to challenge the shooter, and will come well out to the top of crease to cut down the angles (although he can overcommit as stated above). It's rare that he is beat straight on, as evidenced by the point blank stop on Marion Gaborik in the second period against the Wild.

If Climie can learn to control his rebounds better and keep his angles while moving laterally, he has the potential to turn into a more-than decent goaltender. His size and athleticism already set him apart from the crowd. His confidence in net and penchant for playing the puck can really turn him into valuable asset for the Stars.

Climie will most likely be returning Saturday to Idaho to help them in them lock down a playoff spot and lead them into the postseason. Yet he should get one more shot to prove himself tomorrow night against the Colorado Avalanche.

Is Matt Climie the goalie of the future for the Stars? It's impossible to tell after just two NHL games, but the fact that he keeps getting starts show the impression he is making on the team.

Next season, Matt Climie will be splitting time in net with Stars' prospect Richard Bachman as the Texas Stars begin their play in the AHL. Both will be trying to establish themselves as the next great Dallas Stars goaltender and if either could find themselves as Marty Turco's backup at some point next season.

While the Stars will most likely looking for a veteran backup over the offseason, the play of Matt Climie is his late season audition has to have the front office confident that perhaps a one year deal is all that is needed.