The Texas Stars are officially an AHL team

Share All sharing options for: The Texas Stars are officially an AHL team

As part of coverage of the Dallas Stars, Defending Big D will also be featuring comprehensive coverage of the Texas Stars. Look for frequent updates next season on the team's inaugural season, as well as in-depth looks at the Stars prospects and how they are doing in the AHL.

To add to the frustration of a disappointing season, the Dallas Stars were dealing with the lack of an AHL affiliate in which to develop prospects and more importantly, easily pool players to call up when needed. I'm sure when the Stars were planning the shift of AHL affiliates from Iowa to the Texas Stars they didn't forsee the season in between to be one where the Stars would lose over 400 man-games to injury. With no AHL affiliate, Stars prospects and minor league players were scattered throughout the ECHL, AHL and Europe, making the transition back and forth from AHL to NHL and back again a bit less desirable than normal.

So all eyes have been set upon the 2009-2010 season, when the Stars make the big move to their new AHL affiliate the Texas Stars, based out of Cedar Park, Texas which is just outside of Austin. Local hockey fans are ecstatic about the prospect of having hockey right in their back yards, snatching up over 1,000 season tickets already. The team will be playing in the brand new Cedar Park Center, a 6,700 seat state of the art arena that is still under construction and is scheduled to be completed shortly before the season starts this fall.

However, there was some worry as of late that the ownership would not be granted an AHL membership since it had yet to acquire an official AHL affiliate to move to Austin. The original plan was to purchase the dormant Edmonton Road Runners, but the Oilers decided they wanted to keep their farm team in anticipation of moving their Springfield team soon. So this left the Texas Stars without a franchise to purchase and it was uncertain whether they would actually begin play in the 2009-2010 season. 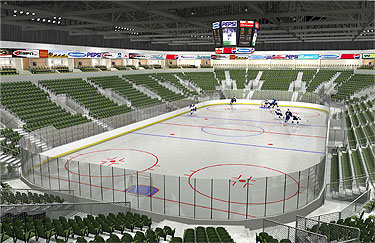 The good news came down today however, that Texas was granted a special exemption by the AHL Board of Governors and approved a limited membership for the franchise. The membership is contingent on the Stars purchasing the first available AHL affiliate within one year.

This gives the Texas Stars the official go ahead to start scheduling games and more importantly selling tickets. This is a huge boost for professional hockey in Texas, especially around the Austin area and should continue the growth in popularity in ice hockey around the great state. I know several fans that live in the area that are pumped about not only a great place to watch hockey, but also being able to see future Dallas Stars up close and personal. Hopefully, the Texas Stars will enjoy the same success of the Frisco Rough Riders have seen as the Texas Rangers' double-A affiliate just north of Dallas.

Be sure to visit the official Texas Stars homepage, where you can view seating and purchase tickets for the upcoming season.

This membership also allows the Dallas Stars to really start focusing on planning who will be assigned to the Texas team. Of course, the official roster won't be known until after camps this summer but we can go ahead and take a good educated guess.

*Could see time in the NHL next season? We'll see.

Cedar Park, TX - The Texas Stars were formally granted a limited membership to begin play in the American Hockey League for the 2009-10 season, it was announced Tuesday by the AHL (see press release below). The move is the anticipated next step towards the Texas Stars beginning their first season this fall at the beautiful Cedar Park Center. The team will be the primary development affiliate of the National Hockey League's Dallas Stars, as the roster will be made up of Dallas' top prospects and draft picks.

WHAT: Texas Stars President and Cedar Park Center General Manager, Rick McLaughlin will address the media at a press conference to discuss the official awarding of a limited partnership for the Texas Stars. McLaughlin also will give an update on the Stars' ticket sales. Texas Stars General Manager Scott White will discuss what is upcoming for the team as it prepares for its first-ever Training Camp, which begins on September 22nd at Cedar Park Center.

TEXAS STARS IN THE COMMUNITY
To schedule an appearance by a member of the front office staff, please contact Veronica Ruiz at 512-260-2541 or vruiz@texasstarshockey.com..

BECOME A TEXAS STARS CORPORATE PARTNER
Your company can become a vital part of the Texas Stars family by reaching our fans with your business message. To create a customized advertising package for your company, please contact Danny Madden at 512-260-2477 or dmadden@texasstarshockey.com.

Located at the intersection of New Hope Drive and Toll Road 183A, north of Austin, the Cedar Park Event Center will be a multi-use facility, with 6,800 seats available for hockey and 8,700 for concerts and other events. The Center will have 24 suites (including four party suites) and 544 club seats with a private club lounge. A retail site of 17 acres is adjacent to the facility grounds for mixed-use development that will include 91,000 square feet for retail and 91,000 square feet for commercial, developed by Hicks Cedar Park, LLC.

TEXAS STARS OFFICIALLY GRANTED AN AMERICAN HOCKEY LEAGUE FRANCHISE
Cedar Park, TX - It is official. The Texas Stars were formally granted a limited membership to begin play in the American Hockey League for the 2009-10 season, it was announced today by the AHL. The AHL Board of Governors approved the membership today at their league meetings in Chicago.

The move is the anticipated next step towards the Texas Stars beginning their first season this fall at the beautiful Cedar Park Center. The limited membership is conditioned on the club completing the purchase of an AHL franchise within one year. The Texas Stars will be the primary development affiliate of the National Hockey League's Dallas Stars, as the roster will be made up of Dallas' top prospects and draft picks.

"This is an exciting day for the Texas Stars, even though this formal awarding of an AHL franchise had been anticipated," said Texas Stars President Rick McLaughlin. "We'd like to thank the American Hockey League and its group of owners in helping make the Texas Stars a reality. The entire area of Cedar Park and Greater Austin has embraced us and we are looking forward to playing hockey in just over five months."

The Dallas Stars will hold a Rookie Camp in Frisco, Tex., from July 6-11. Many of the players at the camp will probably see action for the Texas Stars as their development progresses. The Dallas Stars 2009 Training Camp is scheduled to begin on Sept. 11 in Frisco, Tex., followed by the Texas Stars' first-ever Training Camp that will begin on September 22nd in Cedar Park, Texas.

The Cedar Park Center is scheduled to open on September 26th with a major concert event (artist to be announced soon). The building will include 6,800 seats for hockey and 8,700 for concerts and other events, as well as 24 suites and club seats with a private club lounge.

"The Cedar Park Center is coming along very well," said McLaughlin. "We are on schedule and we have every expectation that the building will be finished on time. It will be a beautiful arena and it is very exciting to see it come together. It will be a terrific building for hockey and all other types of events."

The full Texas Stars AHL schedule will be released later this summer.