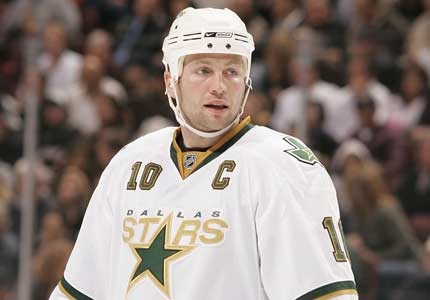 In this edition of StarGazing we look at the bottom lines of Dallas' four major sports teams, a look at a healthy Stars' captain Brenden Morrow and one of the greatest things in pro sports...Stanley Cup playoff game sevens!

The Dallas Stars Blog on DMN.com had a very interesting article on the financial bottom lines of all four of Dallas' pro sports teams, and I have to say that i was definitely suprised by the Texas Rangers figure most of all.  Obviously the goal to any business is to make money.  With the monster contracts that were paid to Alex Rodriguez, and the fact they had to pay his salary for a few years while he was wearing pinstripes, makes it all the more impressive they they aren't in the red.

Not suprising was the profit that the Cowboys were able to turn.

Dallas Cowboys (plus-$390 million): Sure, Jones probably took on a pile of debt to build his stadium in Arlington, but judging by this 2000-2008 bottom line, he shouldn't have too much trouble paying the loans back.

If he made this much while playing in Texas Stadium, imagine the income the new place will reap. And that's just for Cowboys games. The mega sporting and entertainment events will be gravy. Rich gravy.

The Dallas Stars meanwhile, are a meager +$45 million over the last eight years.  Although since 1995 when Tom Hicks purchased the team, he has seen the value of his franchise increase from $84 million to over $273 million which is good enough for over a 300% increase in value.

There is no doubting that Brenden Morrow is the heart and soul of the Dallas Stars.  I knew that he was a special player from the first time that I saw him play back in 1999.  Back then he wore the number 45 and just started out as an energy player on the third and fourth line.

As his career has progressed however, he has become the leader that every coach and general manager dreams of having.  He has never been a threat to score 50 goals a season, in fact he has only broken 30 once; in 2007 he potted 32 goals and 42 assists for 74 points,  all of which are current career highs.

What Brenden Morrow brings to the table is the clutch goal, the timely hit and he is definitely not afraid to drop the mits if the situation warrants it.

But perhaps the best aspect he brings to the team is his unmatched work ethic.

According to him, had the Stars made the postseason he would be just about ready to return to the lineup.

"I was preparing to play in the first round," said Morrow, who cemented his reputation as a clutch player with an outstanding post-season performance last spring. "I probably would have had to wrestle with the team physician on it. I’d been skating for two weeks.  I wasn’t limited on the ice other than battle drills, so had there been a playoff in the future, I probably would have pushed a little harder and done a little more on the ice, but it wasn’t meant to be."

Probably one of the most exciting things in all of pro sports is going to be happening tonight...TWICE!

The Washington Capitals will be playing host to the New York Rangers.  In one of the most epic collapses by a team in recent memory, Henrik Lundqvist has allowed 9 goals on the last  34 shots. Honestly though, playing arguably the most difficult position in all of sports, how could he not at least be a little distracted by the circus that is the New York Rangers right now.

How could anyone focus with all the negative media attention surrounding the Blue Shirts right now, let alone a goalie? Ultimately the blame is going to fall on King Henrik, but I think that everyone in that room needs to take a look in the mirror and ask themselves what the hell went wrong?  I have just two words...Sean Avery.

In another series that has a little bit of it's own controversy, the 'Canes and Devils will also be playing a game seven on Tuesday night.

At the end of game four, and I do mean the end, former Dallas Stars forward Jussi Jokinen deflected a shot past Martin Brodeur that hit the back of the net with only 0.2 left on the clock.  Immediately after the goal was scored Brodeur voiced his displeasure with being bumped by Jokinen.  After the review revealed the goal had indeed crossed the line before time expired, Marty lost his mind.  It is worth noting that contact with goaltenders is not reviewable by the NHL's War Room and the decision to call goaltender interference lies with the referees.

The normally calm Devils' goalie skated toward the official's crease where he got in the face of the referees to let them know how he really felt, then after a few moments skated toward the dressing room breaking his stick along the way.

Ever since then, he hasn't been the same.  Yes he did post a shutout in game five stopping all 44 Hurricane shots, but even in that game, he wasn't really himself.  My suspicions were confirmed in game six when he let in four goals on 37 shots.  A couple I am sure that he wishes he had back.

For any other goalie in the league that would have been a somewhat respectable night.  I know it is sometimes hard to expect more than that from your goalie, but Martin Brodeur is no ordinary goalie and needed to be better.  He wasn't, so here we are, heading back to Newark on Tuesday night for what truly will be a barn burner. 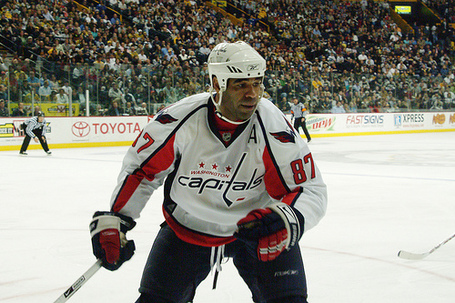 "Brashear delivered a shoulder hit to an unsuspecting player. It is also my opinion that the hit was delivered late and targeted the head of his opponent, causing significant injury."
-- Colin Campbell

The hit Mr. Campbell spoke of was a cheap shot he delivered to Rangers' forward Blair Betts.  Betts ended up having his orbital bone fractured on the play and will more than likely miss the rest of the postseason regardless of what happens tonight.

This hit however, only accounts for five of the six games handed down by the NHL.

He was suspended an additional game for initiating contact with Colton Orr during pre-game warmups.  Initially thought to be only minor in nature, it was clear that he knew exactly what he was doing.

The suspension should not effect the Capitals too much as Brashear has only been playing limited minutes so far, but without him, are the Rangers, possibly other teams going to feel they can take liberties with the Caps' star players without fear of reprisal? It will definitely be something that I will be watching for.