They're Still Bitter in Buffalo

Share All sharing options for: They're Still Bitter in Buffalo

One of my friends over at TSF who lives in Canada went to the Buffalo Bills Draft Day festivities at Ralph Wilson Stadium yesterday.

While walking through the parking lot, he noticed an intriguing license plate. 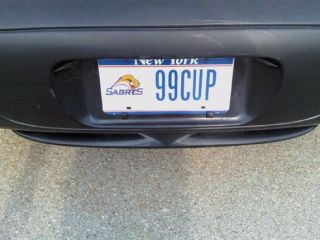 On a side note, there's no group of fans that I wish failure upon more than Buffalo fans. I felt sorry for them in the early 90's because they dominated the AFC for several years, got to four consecutive Super Bowls, but just couldn't get over the hump.

And then 1999 happened. T'was a magical year to be sure for the Sabres that year. They made the playoffs as the 7th seed in the East, but upset Ottawa in the first round in a sweep, then defeated the Bruins in the Conference Semi's in six games, followed by a win in the Conference Finals in five over their bitter rivals to the north, the Toronto Maple Leafs, to launch them into the Stanley Cup Finals.

Where, of course, they met the Stars. Now going in, I can understand the animosity they had towards the city of Dallas. Afterall, the Cowboys handed the BIlls their last two Super Bowl losses in the 90's.

And just like in those two Super Bowls, a Dallas team prevented Buffalo from tasting a championship by beating them in the 1999 Stanley Cup Finals on what they consider to be a controversial goal.

I've gone to great lengths in the past to prove why the goal was good. In a nutshell, the NHL allowed players who had previously established possession of the puck to go into the goal crease even if the puck didn't follow them in. And Brett Hull became the possessor of the puck when he deflected Jere Lehtinen's shot from the half boards in on Dominik Hasek.

And since the Sabres' netminder never gained control of the shot, Hull maintained possession, was legally in the crease, and then scored the goal that gave the Stars the Cup. For good measure, he also kicked the puck into a position where he could score prior to his skate entering the crease.

But let's just say for the sake of argument that these Western New Yorkers were right. That Hull's goal was illegitimate and shouldn't have counted.

Obviously, they would have kept playing until somebody scored to end it. And considering Buffalo had only scored one goal in the last 207:24 of the series (a Stu Barnes goal in the second period of Game 6 that knotted the score at 1-1), I don't think Sabre fans would have a mountain of evidence suggesting their team was capable of scoring to win Game 6, then flying down to Dallas and taking Game 7.

Call me a homer, but I think if it had taken six OT's to keep Buffalo from scoring, Ed Belfour would have been able to pull it off.

Nonetheless, the infatuation that Western New Yorkers have with that call still today simply boggles my mind.