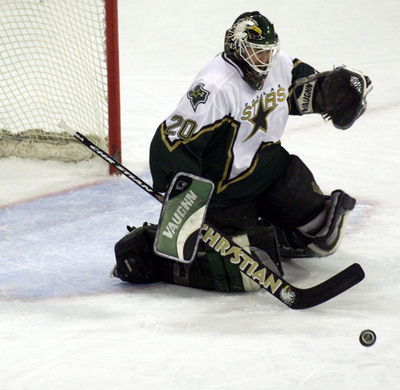 Ah, the great Eddie the Eagle.

After the Dallas Stars fell to the Edmonton Oilers in the 1997 playoffs, veteran netminder Andy Moog decided to retire. In an effort to put the team over the edge and back into position to contend at the highest level the Stars went out and signed the top goalie free agent on the market, Eddie Belfour.

Belfour came with some baggage, however. It was generally thought he was a hothead goaltender who just couldn't cut it in the postseason, and was a bad teammate in the locker room. Undrafted, he was signed by the Chicago Blackhawks and quickly became one of the top goalies in franchise history. However he constantly had issues with his backups, notably Dominik Hasak and Jeff Hackett and was eventually traded to the San Jose Sharks in 1997. Despite winning the Vezina and Jennings trophies twice with the Chicago Blackhhawks, teams were hesitant to take the chance on what they thought was a risky player. 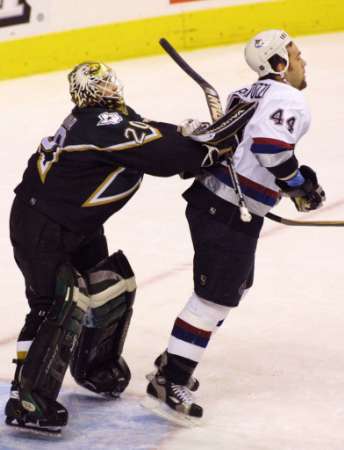 Belfour lived up to every bit of his reputation in Dallas, but also had the best years of his career with the Stars. After posting a 1.88 goals-against average and a .916 save percentage in 1997-1998, he helped lead the Stars to the Western Conference Finals before losing to Detroit. The next season, he earned the Jennings trophy once again and then led the Stars to a Stanley Cup Championship in 1999.

Eddie endeared himself to Stars fans with his fiery attitude that perfectly complimented his big saves. He was always the rock in net behind a strong team, and provided some color on a Dallas Stars team that was just a bit bland overall (besides Brett Hull). I can still hear the chants inside Reunion: "ED-DIE! ED-DIE!"

While the Stars enjoyed some of their best season with Belfour in net, there was always the "other" things that seemed to mess with the overall good feeling. A couple of arrests, some run-ins with the media and just an odd personality could have marred what otherwise would have been a perfect time with the Stars.

Belfour left the Stars as a free agent in 2002, and enjoyed several more years in the NHL with the Toronto Maple Leafs and Florida Panthers. He played briefly in Sweden before officially retiring last year. 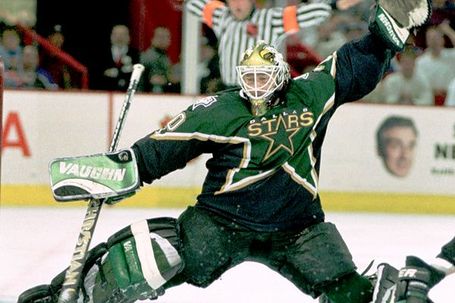