How accountable should Dave Tippett be for this past season?

Share All sharing options for: How accountable should Dave Tippett be for this past season?

For those of you who have asked, the Dallas Stars season retrospective will be presented in three parts starting this weekend. 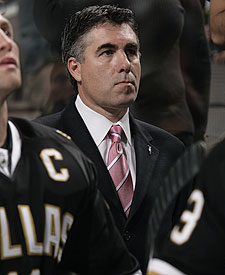 With word coming down today the Edmonton Oilers had fired coach Craig McTavish, my thoughts immediately turned to Dave Tippett. The Stars missed the playoffs this season for just the third time in 16 years, yet there is some bitter disappointment inherent after a season that was supposed to be great turned disastrous fairly quickly.

For a team that struggles for relevance in a city with the Cowboys, Mavericks and even the Rangers, winning and winning consistently are the only ways to maintain interest in a hockey team in a football state. Despite the fact that the Stars are the classiest, hardest working, and most consistent team in the town (not to mention the only one to win a championship in the past 13 years), its not fair that this is the burden laid upon the organization but that is the reality of the situation.

So how much of the failures of this past season can be laid upon Dave Tippett's feet? The quick answer is to say none; the Stars had too many injuries to compete with healthier teams down the stretch. The team just lost too many key components and couldn't keep up the pace. But there certainly were some things Tippett could have done better.

The Stars power play was woeful all season long, ending up ranked 27th in the league. The team's inability to score on the power play was one of the primary causes of the big downfall in February and March. Sure, the team lost Sergei Zubov and Brad Richards but at times the power play units looked lost, disconnected and completely disjointed and not creative at all.

It falls on the coaching staff to adjust your strategies to fit the personnel on the ice, and this season it seemed as if the players were being forced into a system that wasn't working. Towards the end of the season, once the Stars had some players that actually fit into Tippett's system, the power play improved a bit but for a good seven weeks it was absolutely putrid.

The other issue was how Tippett handled the backup goaltending situation. The coaches and front office will say that Tobias Stephan had a bad training camp and didn't give any hints he was ready for 20 games as the backup. If that was the case, there were plenty of veteran netminders that became available throughout the season that could have done fine for one year.

And you can't tell me that having Tobias Stephan allowing 4-5 goals a game would have been any different that Marty Turco doing the same thing. Turco was overused in the middle of the season and when the team needed him most, he was too fatigued and worn down to give them the backbone they so desperately desired.

Yet despite these few misgiving I had about Tippett througout the season, I still believe he is the right person for the job. For now. He exemplifies the attitude and team atmosphere this franchise is known for, and isn't afraid to shake things up (sometimes) when things start going wrong.

The incredible amount of injuries this team had to endure this season most likely saved Tippett his job. Yet if the Stars falter again next season, expect a quick decision to be made to get things back on track. The Stars will be younger, faster and healthier next season; no excuses in 2009.