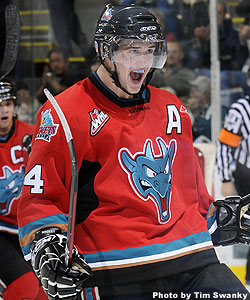 The NHL season is drawing to a close, the AHL is about to start their playoffs and the junior hockey leagues are already deep into their postseason. With the focus of the Dallas Stars turning to build up their system with young prospects, we're going to start tracking the progress of players in the Dallas Stars system as well as updates on what the numerous prospects are up to as well.

Starting next season, expect a weekly update for both AHL/ECHL players and the junior league prospects.

For now, we'll start updating on what the Stars' players are up to in this season's playoffs, starting with the prospects today and updating the AHL players once those series gets underway.

There are a number of Stars prospects playing in the various junior league playoffs, but none is having the impact that Jamie Benn has had on the Western Hockey League. Benn leads the league in assists and points in the playoffs and has helped lead the Kelowna Rockets to a 3-2 lead in their second round series, after sweeping the first round. Benn scored the winning goal in overtime in game four, capping off a four point night on Wednesday. Friday in game five, a 5-2 win, Benn notched two more assists. The Rockets host game six tonight, and if so inclined you can follow the game on the WHL website.

Here's a look at the playoff stats for the Dallas Stars prospects, as of Sunday, April 12th.

Tyler Beskorowney appeared in 27 minutes of a playoff game, yet did not last very long, allowing six goals in the loss.

Follow the jump for a look at the total season stats for all Dallas Stars prospects.

You can find a full list of all Dallas Stars prospects in the sytem at the DallasStars.com website.