Mike Ribeiro used a move in the Stars shootout win over the Avalanche on Thursday night, that most people wouldn't dare try outside of practice.  Luckily for the Stars, Ribeiro isn't most people.

The third shooter for the Stars turned his back to Avs goaltender Peter Budaj, put the puck between his legs, then fired a forehand shot that deflected high in the air off Budaj. After what seemed like 5 minutes came down behind the Avs goalie and trickled across the goal line to seal a Stars victory.

Both teams initially came out very cautious, but a few big hits by both teams seemed to loosen things up.  5:06 into the first Matt Niskanen took a slashing penalty which put the Colorado on the first power play of the game.

Much like most of the 14,000 or so fans in the Pepsi Center, the Avalache didn't have much energy on their initial power play.  They seemed very disorganized and only managed 1 weak shot on Dallas goalie Matt Climie.

Throughout the first period both goaltenders were making timely saves that helped keep their team in the game.  Two specifically in the first period that stuck out in my mind was the save Budaj made on Steve Ott at 7:58 and Matt Climie's save of Cody McLeod shortly after that.

As the second period began, I knew that both teams were going to come out flying and that is exactly what happened.  Each team had great scoring chances early on, and what normally happens when the game goes for a long time without stoppages? Players get tired and start to clutch and grab.  Matt Niskanen took his second minor of the game at 6:44 of the second, this time for tripping.

Colorado seemed to throw everything but the kitchen sink at the Dallas but only managed to get 2 shots on net.  Stars penalty killers frustrated the Avs shooters by blocking several chances.  Fortunately for Dallas, the Avs were not able to capitalize on the power play chance.

The building started to gain a little bit of life as the Avs continued to build on the momentum they gained from a decent looking power play.  The building deflated a little bit after a giveaway by Climie behind the net turned into a glorious scoring chance that Cody McCormick.  Climie managed to scramble back to the front of the net just in time to get the shaft of his goal stick in the way. 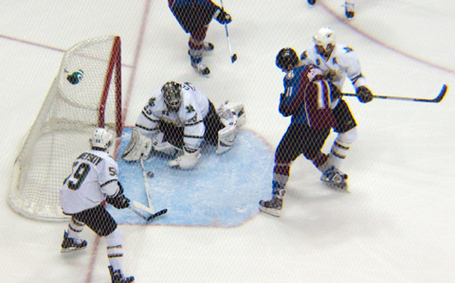 Almost halfway through the second Dallas was guilty of their 3rd minor penalty of the game.  This time Stars defenseman Andrew Hutchinson was guilty of hooking giving Colorado their third power play of the game.  Dallas almost had the penalty killed, then Chirs Stewart scored his 11th goal of the year.  Assisting on the goal was Avalanche rookie defenseman Ray Macias, who earned his first point in the NHL.

Colorado was handed another power play chance less than a minute later as Brendan Morrison shot the puck over the glass.  The penalty kill this time was much better not allowing the Avalanche a chance to even get setup.

The Stars turned up the pressure as the second period was fading away, forcing Budaj to make several key saves including a flashy glove save on Steve Begin.

Right out of the gate the Stars jumped all over a lathargic Avs team.  This lead directly to the Avs up and coming prospect T.J. Galiardi taking a 2 minute cross checking penalty 26 seconds into the third frame.

Dallas seemed to have their power play clicking on all cylinders most of the night even though they only had 2 chances with the extra man.  The Stars went 1 for 2 on the power play with Fabian Brunnstrom re-directing a Loui Eriksson pass past a sprawled Peter Budaj to take the lead 2-1 with just 3:11 remaining in the game.

Colorado knew the only way they were going to get back into this game was to turn up the physical play.  Which is exactly what they did.  They were the ones starting to win the races to loose pucks.  This lead to John-Michael Liles getting the puck below the Dallas goal line and throwing a prayer toward the front of the net that banked in off of Climie less than a minute after Dallas took the lead.

Liles' goal absolutely blew the lid off of Pepsi Center a.k.a. "The Can".  For the rest of the game most fans in the upper bowl didn't sit down.

Peter Budaj almost gave the game away with 1:47 remaining by giving the puck away behind his net only to be bailed out by his defense.

Heading into overtime I think the Avs still had a little momentum still on their side from the wacky Liles goal.  It definitely showed as Colorado came out flying and T.J. Hensick sent a hard wrist shot off the near goal post that brought the Avalanche faithful out of their seats for a moment.

At this point you would have never been able to tell this was a game between two teams that had already been eliminated from the post season.  Both teams were flying up and down the rink generating great scoring chances only to be denied by the goaltenders.  It truly had the feeling of a playoff game.

As overtime ended and the game was heading to a shootout, I knew things were going to get interesting.  Both teams boast some of the most creative players in the game and the Coach Tippet and Coach Granato did not disappoint.

First up for the Avalanche was shootout specialist Wojtek Wolski.  The 23 year old native of Poland pulled Peter Forsberg's patented move by pulling the goalie to the right and sliding the puck in past Climie's outstretched leg. 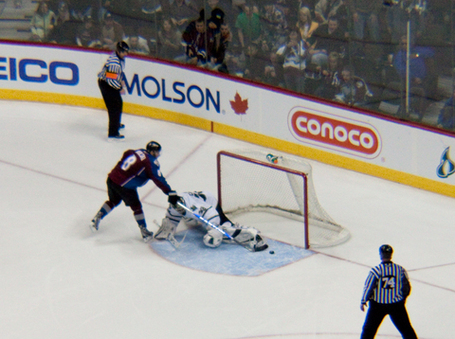 First shooter for the Stars was the always dangerous Fabian Brunnstrom who put a nefty backhander past goalie Peter Budaj. 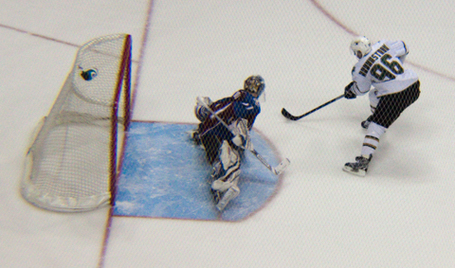 Next up for the Avs was Milan Hedujk who used a nefty forehand/backhand move and roofed a shot past Climie. 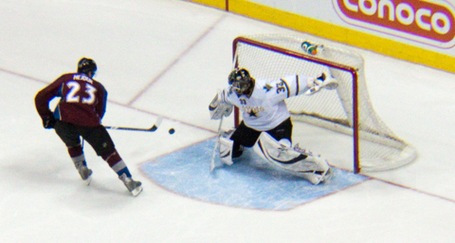 Next for the Stars was James Neal who sent a twisted wrister past Budaj.

Third up for the Avs was second year player T.J. Hensick. He deked a little too close to Climie who was able to poke check the puck away from him. 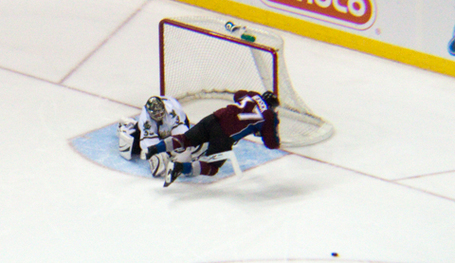 The next goal needs absolutely no lead in so I am just going to show you the picture I was able to capture from my seat.  You can barely see the puck against the "31" on Budaj's right arm. 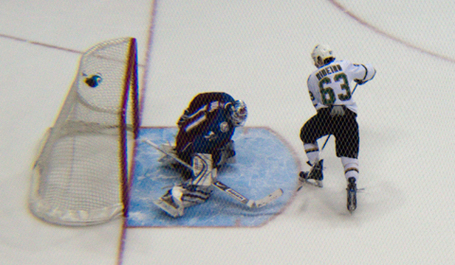 It was a heartbreaking way for the Avalanche to lose, but the well over 1,000 Stars fans walked away with a huge smile on their faces as the Stars won at Pepsi Center, something they hadn't done since the 2006-07 season.