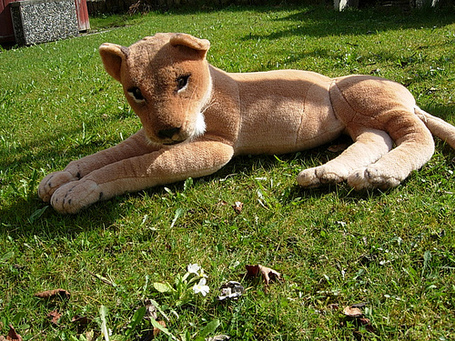 Awww, ain't he cute? Be sure to check out Litter Box Cats for the Florida perspective.

This could be it. The Stars sit five points behind the 8th spot in the west with just eight games remaining. Anything less than two points tonight will most likely spell the end of any playoff dreams the Stars might have. Although they won't be mathematically eliminated, at this point the mountain is just too high to climb.

Five points out, eight to go and four teams to jump over? I still have hope.

The day following another disastrous 5-2 loss, Marty Turco stood in front of the media and confessed how dissapointed he was in his own play and how he vowed to immediately make up for it. He backed up those words Thursday against Los Angeles, putting together a solid 30-save shutout. Unfortunately it was also the second time this season Turco shutout the opposition and the Stars still lost the game.

Scoring woes continued for the Stars Thursday yet more disturbing was how the Stars' power play fell even further down the rabbit hole. The Stars have scored just one goal in their last 32 power play opportunities; that's good for the wonderful number of just a 3% success rate.

If the Stars hope to maintain any chance whatsoever of doing the impossible, something must happen on the power play.  It's not as if the Stars aren't getting any chances; against the Kings the Stars had a number of excellent chances off some good pressure in front of the net. Dave Tippett moved Brendan Morrison into a more permanent position at the left point, and immediately he made an impact into the type of strategy the Stars employed. Morrison is aggressive with the puck from the point and attacks the defense rather than be content to just shoot it from the blue line.

The Florida Panthers, like the Stars, are fighting for the playoff hopes right now. Unfortunately they have a much more realistic chance and are going to be a desperate and dangerous team to face down the stretch. However, Florida is just 3-4-3 over their last ten games and is definitely a team the Stars can beat.

Litter Box Cats is reporting that Craig Anderson will get the start in net tonight for the Panthers. Anderson is coming off a 40-save win for Florida and Pete DeBoer has decided to go with the hot hand in net. Once again, the Stars must try to find their scoring ways against a goalie on a hot-steak.

This will also be an up close glimpse at soon-to-be free agent Jay Bouwmeester, the big, talented defensemen that has most teams salivating over. Bouwmeester is the the perfect example of the type of player the Stars desperately need on their blue line. If he will be too expensive for the Stars, that remains unclear.