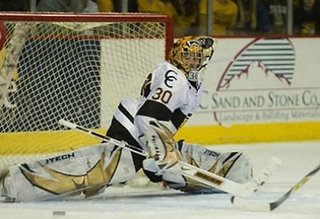 The Dallas Stars have announced the team has signed goaltender Richard Bachman to a three-year entry-level contract. Bachman has spent the past two seasons playing at Colorado College, and has decided to turn pro and forego his last two season of collegiate eligibility. After putting up some incredible numbers in 2007-2008 he has had a bit of a down year this season, which is most likely due to the fact the team is front of him hasn't been good either.

Here are his collegiate stats:

Athletic and technically sound goalie who does a good job of covering the bottom of the net. Displays good glove hand. Shows good patience. Can recover quickly after making initial stop. Has excellent reflexes. Very composed under pressure and never seems to panic. Not a big goalie, but he plays big.

Is Bachman the goaltender of the future for the Dallas Stars? He certainly has the chance to be. Depending on how he performs next season in the AHL, he could certainly have the chance to be Marty Turco's successor in net. Turco is scheduled to be a free agent in 2009 and it's uncertain what his future with the Stars holds.

What are your thoughts on what the Stars should do in goal over the next few seasons? Of course a lot has to do with how Bachman performs in the minors, but is this a goalie the Stars should build towards in a few years?

FRISCO, Tex. - The Dallas Stars announced today that the club has signed goaltender Richard Bachman to a three-year entry-level contract. Bachman recently wrapped up a two-year career at Colorado College, and will forego his final two seasons of eligibility with the Tigers.

"Richard had an outstanding, highly-decorated career at Colorado College, and he's ready to take the next step into the professional ranks," said Dallas Stars Co-General Manager Les Jackson. "He has an outstanding set of fundamentals and a very bright future ahead of him, and we look forward to his continued development in our organization."

As a freshman in 2007-08, the Salt Lake City native was named the National Rookie of the Year by the HCA (Hockey Commissioner's Association) and Inside College Hockey magazine, and became just the second player ever to be named WCHA Player of the Year and Rookie of the Year in the same season. The 5-11, 170-pound goaltender also earned First Team West All-America and First Team All-WCHA honors, and was named to College Hockey News' All-Rookie Team.

Originally selected by Dallas in the fourth round (No. 120 overall) in the 2006 Entry Draft, Bachman backstopped CC to the WCHA title in 2007-08, shattering school records with a 1.85 goals-against-average and .931 save percentage, both of which ranked third in the nation. He posted a stellar 25-9-1 record with four shutouts, and allowed two-or-fewer goals in 25 of his 35 starts as a freshman.