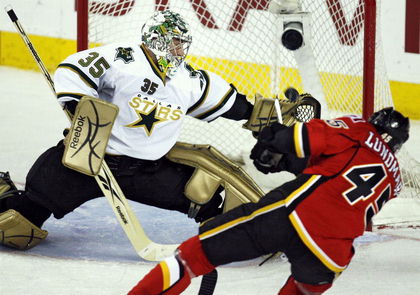 Following up on yesterday's quote from Marty Turco, it's apparent that he's not the only one disappointed in his level of play. With the team struggling so much the past month with injuries, special teams and especially the power play, the Dallas Stars needed Turco to step up and be the unmovable force that propels them through the rough patch. Instead, he struggled right along with the rest of the team and inconsistent goaltending has become yet another growing list of issues for the Stars.

It's tough because Turco really put together a solid couple of months in January and February. After having a career worst start to the season, he rebounded and was a big reason this team made the leap up the standing that it did. Yet now he has fallen back to earth and it has not been pretty.

Mark Stepneski has a look at Turco's numbers by the month:

Whether it's the defense, fatigue, lack of team scoring or a combination of all three, there's no doubt that Turco has hit the wall right along with the rest of the team. He leads the league in ice team with 4,019 minutes and has started all but four games for the Stars this season.

Should the Stars continue to ride Turco or should they play Tobias Stephan exclusively down the stretch? This would be the perfect time to really get a gauge on how ready Stephan is for the NHL. The team has floundered the position of backup goalie all season and now they are paying for it with Turco's TOI. Play Stephan at least six of the last nine games and see what the kid can do with extensive playing time.

Unfortunately, it's doubtful the Stars even come close to that idea. The coaches and management are going to grasp onto the idea of the playoffs until the Stars are mathematically eliminated.

Bob Sturm over at Inside Corner gives his thoughts on the top 5 trades in Stars history. His #1 choice is the trade that sent Kevin Hatcher to Pittsburgh in exchange for some guy named Sergei Zubov. Coming in a close second is the trade for Mike Ribeiro, for whom the Stars only gave up Janne Ninnimaa and and mid-round draft pick. I'm torn on this one, especially since Ribeiro is the Stars' top scorer the past three seasons. What are your picks?

A bunch of players sat out of yesterday's practice. Toby Petersen is still in a walking boot and Brenden Morrow was spotted on the ice, although it's obvious he is still a ways away from returning.

Richard Durrett takes a quick look ahead to the NHL draft.

Mike Heika mentions how the LA newspapers aren't sending reporters to away games and talks about how more fans are turning to blogs for their coverage, especially when local newspapers stop caring about the team.

Mark Stepneski looks at the standing in the playoff race. In short, the Stars are pretty much frakked.

Some good news!! Jamie Benn tore it up in the playoffs for Kelowna, getting three goals and seven assists in the four game series.