Where are the Dallas Stars' guts?

Share All sharing options for: Where are the Dallas Stars' guts? 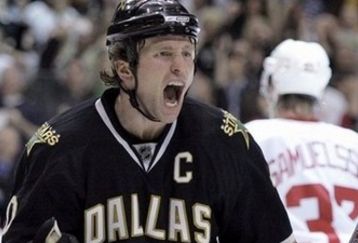 In yesterday's story about the current state of the Dallas Stars I mentioned how one disturbing aspect of the past few weeks has been this team's lack of togetherness. When Steve Ott was attacked by several Ducks players at the end of the game Saturday, not one player came to his rescue. Sure, they would have risked penalty and suspension but in a situation like that where the officials are clueless and your teammate is in trouble you have to help out.

How do you think it makes Steve Ott feel? Here's a guy who lays his body on the line every single game. He may not be able to legally get in a fistfight but I gaurantee you he would be the first player on the ice to come to the aid of a Star in trouble. Over the past month he had become the emotional epicenter of this team and his play, both physical and offensively, were what helped lead the Stars to a great record in December and January. Yet here he is, getting pounced upon by several players at once and not one guy comes to his aid. You think that may have led to some glares in the locker room?

Even more disturbing was what happened (or didn't happen) yesterday against Pittsburgh. Evgeni Malkin took a deliberate run at Daryl Sydor, hitting him up high with both forearms and crushing his head into the boards. It was a clear blow to the head and it left Sydor dazed on the ice. Did a single Dallas Star go after Malkin for the hit? Nope, not a one. So let me get this straight: All season long whenever there's been a hard hit on a guy on the ice, even if it was completely clean, you see at least one of the big guys defend his teammate. But when one of your veteran leaders is coldcocked against the boards with a forearm to the noggin you just stand idly by?

This is the biggest measure of the state of this team right now. These non-actions tell me this team is frustrated, exhausted, flabbergasted, dazed and not quite sure what to make of this sudden collapse. But that does NOT excuse not sticking up for your teammates.

If the Dallas Stars have ANY hope of turning things around and making the playoffs they must regain that team mentality that got them to 5th place in the West in February. There won't be whole lot of extra help coming anytime soon, so the guys that are in the locker room now, that who it's going to be fighting down the stretch. For a hockey team to have success it must play as one, skate as one and think as one singular consciousness on the ice. That comes together in the inner core of the team, in the guts of the team, and expands to all other aspects of the game. Brenden Morrow has guts. Steve Ott has guts. Does anyone else?

The Dallas Stars have always been known as a team, not a group of individuals. That's why the Sean Avery experiment didn't work. Yet a five game home losing streak will find a way to strike a rift in the team, to cause people to take sides, grow quiet and contemplate their actions more. It takes the emotional aspect out of the game and that's a dangerous notion when it comes to hockey. The Stars can't rely on just one or two players to provide that emotional boost necessary to get out of this slump. Even Steve Ott doesn't have that much power.

The veterans on this team have to find a way to band this group of players back together into a team. If that doesn't happen then this season will end long before it was meant to.