Breaking down the Dallas Stars power play (or lack thereof)

Share All sharing options for: Breaking down the Dallas Stars power play (or lack thereof)

One of the biggest struggles for the Dallas Stars the past few weeks has been the extremely disappointing production of the power play. While the Stars' special teams hasn't been earth-shattering this season, it has become absolutely putrid since Brad Richards injured his wrist. As Gravypan covered earlier today, the Stars' uneven play last night on special teams directly resulted in the disappointing loss.

What has caused this breakdown in production on the power play? Why is it that Dave Tippett, once renowned for his prowess as a PP coach, can't come up with a system that maximizes the use of the man-advantage? Is it really just a matter of losing Brad Richards? Follow the jump to find out. 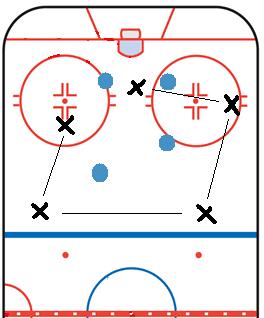 Now this is purely a rudimentary diagram of a power play formation, and what the Stars primarily run since Brad Richards was injured. The "X's" represent the Stars players and the blue circles represent the defenders.

In this basic setup, the Stars are attempting to create scoring chances by spreading out the defenders which in turn opens up space in front of the net. This is supposed to accomplish two things: give the man in front of the crease room and time to react to rebounds and allow the man in front ample room to screen the goalie while attempting to deflect shots coming in from the perimeter.

The way the Stars run this formation is what is making their power play so predictable and easy to defend. The Stars are focused on shots from the perimeter and banking on either a) a shot getting through the screen or b) a Stars player taking advantage of rebound or blocked shot. However, there is nothing about this formation that will cause the goaltender or lower defenders to slide out of position.

The Stars are thinking too much in when running this formation, receiving a pass and then pausing before moving the puck. It's almost as if they're waiting for an opening somewhere that will allow that perfect cross-ice pass to the winger on the far side. What this does is it gives the defenders time to react to where the puck is and to keep the puck along the perimeter. The defense can then shrink down towards the net and block any shot from the perimeter.

The way to make this setup work perfectly is to use crisp, quick fire passes around the perimeter that spreads the defense out, and could possibly allow a long pass across the center of the formation. The goal is to somehow pull the defense and the goaltender out of position and take advantage of the open spot. Yet this can't happen if the Stars just slowly move the puck along the perimeter, think about the next move and then move the puck along again. Bombing the puck from the perimeter on occasion won't work if it is the only move the team has on the power play. Unfortunately, this is what the Stars have resorted to the past month. 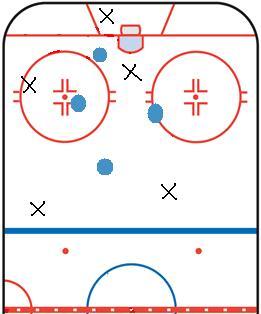 This formation is one the Stars have had semi-consistent success with this season. It involves dropping a player behind the goal line who then attempts to pull the defense out of position with posession from behind the net.

Typically, this is where Mike Ribeiro is at his best. He is adept at handling the puck from behind the net and finding that perfect crease across the middle to the man directly in front of the net, or that uncoverd point man dropping down into the slot. Yet this formation needs a few other key ingredients other than just Ribeiro getting the puck along the boards.

The defense needs to be forced to stay honest in their setup. If there aren't any threats on the outside or on the point, the defenders can then drop down and be aggressive with the man with the puck. This is where Brad Richards' absence really hurts the Stars on the power play. Not only does Richards possess a lethally accurate shot but he is an extremely crisp passer who knows how to thread a puck through traffic.

If the defense is dropping down to take away the plays from behind the net, Richards was always able to take advantage by quickly moving the puck back across ice to the uncovered man on the far side. This creates mismatches up front, as well as opens up the far side of the net to one timers.

To get an idea of how the Stars have been successful on the power play in the past, and consistent with the power play, look no further than the series winning goal from last season versus the Sharks. 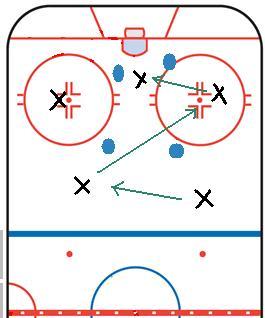 In this play, the Stars used crisp, quick passes across the top of the slot to draw the Sharks' upper defender out of position. This in turn opened up an area between the circles which gave Mike Ribeiro room to move up and challenge the front of the net. A quick decision and no-look pass to Robidas on the right side pulled the left defensemen towards the outside. This opened up Brenden Morrow in front of the net, whom Robidas found with a fake shot and perfect pass. It was a tap-in goal for the win.

This is a setup and method the Stars have used to great success this season. It uses an aggressive approach that is designed to create havoc for the defense and pull them as far out of position as possible. The passes come quickly after receiving the puck and don't give the defense time to adjust to the movement.

This strategy is born out of a confident power play unit that likes to be aggressive and put the puck on net. This season, and especially since Richards' injury, the Stars have been unsure of themselves with the extra man and seem pressured to make the perfect pass, the perfect play that almost ensures a goal with the shot. This uncertainty with the puck gives the defense time to adjust and then when the Stars try to create chances with outside shots, there aren't any defenders out of position.

“Our execution isn’t what it needs to be on the power play. We are trying to be too cute at times and we have to create momentum with our power play, not killing it.”

The Stars are at their best when they become aggressive on the power play. James Neal scored on the power play against St. Louis by pressing towards the net with the puck. Steve Ott has found a niche on the power play by using Brended Morrow's strategy of causing havoc in the crease, deflecting shots and picking up the trash off rebounds. Mike Ribeiro is capable of some incredible passes but he needs another threat on the ice to keep the defense from double teaming him when he has the puck.

This can all be remedied with confidence and aggressiveness. While a lot of us would just rather see the Stars pummel the goalie with shots from all over the ice, the trick is to use crisp movement of the puck to pull defenders away from the net that would allow said shots to actually reach the goaltender.

Perhaps the Stars need to swap out some players on the point, such as bringing in Trevor Daley to work on the power play off the blue line. Whatever the Stars decide to do its obvious that the current method is just not working.

They need to look no further than last year's playoff to find a strategy that works just fine.