Dallas Stars go down in Vancouver 4-2

Share All sharing options for: Dallas Stars go down in Vancouver 4-2 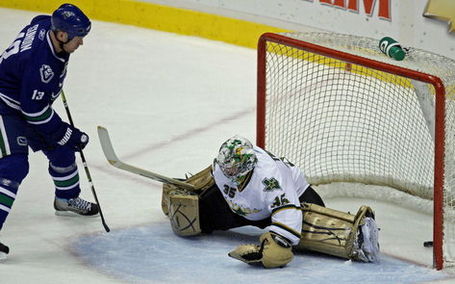 Let the leap-frogging begin. In the course of two nights and one loss, the Dallas Stars fell from seventh to ninth in the Western conference and must now rebound after a very disappointing loss to the Vancouver Canucks. In a game that saw plenty of hits, a hostile crowd and a definitive playoff atmosphere, the Canucks were just the better team as the Stars struggled once again to take advantage of the opportunities afforded them.

Last night was a perfect example of how poor special teams play will quickly derail a game, no matter how hard you might play. The Stars surrendered two power play goals and failed to take advantage of numerous power play opportunities, including a lengthy man-advantage sequence in the third period that had 46 seconds of 5 on 3.

It has quickly become a very disturbing weakness in their game and if something doesn't happen soon these playoff hopes everyone's big on will go right down the tubes. Since Brad Richards went down with his wrist injury the Stars are 8-71 on the power play in 14 games. That's a horrid11.2% and a number that no team can have success if they maintain that rate. Now its fine to a point if you're being stingy on the penalty kill but the Stars have sprung a leak there as well, allowing ten power play goals in their last ten games.

Last night the Stars played hard, they showed hustle and they did their best to match up with Vancouver's physical style. They didn't back down and did their best to create chances. Steve Ott was again tremendous, drawing three penalties and adding a goal and an assist. Once again, he was the Stars' best player on the ice. But last night, it was obvious that the Canucks were just the better all-around team. They are more skilled top to bottom and are playing at a much higher level than the Stars. When a team is dealing with the number of injuries the Stars are, then sometimes that's going to be the reality we have to deal with.

Marty Turco made several great saves and did his best to keep the Stars in the game. he was also incredible handling the puck, several times making long breakout passes to Stars forwards. It's tough to blame him directly for any of the four goals. Yet at times like these the Stars need him to be other-worldly stupendous, and that's tough to do game in and game out.

The Stars take on Calgary tonight in what is now an extremely important game. On this road trip, the Stars needed to take at least four points of six for this stretch to be deemed succesful. The Stars have been excellent against the Flames this season and should be confident as they head into Calgary. How they respond after last night's game is critical.

Ryan Kessler, Vancouver: A goal and an assist and was a man on a mission all night. Made several tenacious defensive plays on the penalty kill and showed great skill and effort on his goal.

Steve Ott, Dallas: A goal and an assist and once again at the top of his game, drawing three penalties on the night.

Mats Sundin, Vancouver: A goal and an assist. Has started to finally become the impact player for the Canucks they had hoped he would be.