Share All sharing options for: Dallas Stars make their own luck in 3-2 win over Hurricanes

When things aren't going well and the bounces don't seem to be going your way it can feel as if luck just isn't on your side anymore. The Dallas Stars, 2-7-1 in their last ten games before Thursday night, had seen just about anything and everything go wrong over the past few weeks. Shots were hitting the post, the loose-puck battles were never won and a rash of untimely injuries had robbed the team of confidence and fight. It was a downward spiral of bad performances and it seemed as if nothing would ever work out for the Stars again anytime soon.

Sometimes when things aren't going your way you have to bear down and keep working until you force them to.

"I think we all believe we make our own luck," Marty Turco said after game. "And then you take it when you get it."

Yet things could have gone much differently and seemed to be headed down the same disappointing road as before. The Stars came out in the first period energized and determined to turn things around after bad losses to Montreal and St. Louis. Despite outshooting the Hurricanes 15-9, the Stars found themselves down 1-0 heading into the second period after Rod Brind'Amour scored a shorthanded goal on a two on one.

The Stars could have easily hung their heads and get down on themselves and wonder just what they had to do to get a break. Yet they came out in the second period more determined than ever and pressed Carolina with strong forechecking and relentless puck possession. Eventually, the hard work paid off when a Mike Ribeiro pass into the slot went off a defenseman and past Cam Ward to tie the game at one.

"I’m a big believer that you work for your breaks," Stars coach Dave Tippet said. "Tonight, we worked for our breaks. Sometimes you get rewarded for your work and [Ribeiro’s goal] was one that we got rewarded for."

Just five minutes later Steve Begin recorded his first goal as a Dallas Star when he slipped a rebound past a sprawling Ward to give the Stars the lead. The goal came with Begin and Krys Barch crashing hard to the net, something that had not been happening lately for the Stars. Begin and the fourth line set the tone all night for the Stars with their relentless and physical play and their enthusiasm carried over to the rest of the team.

"Guys responded pretty well. It’s teamwork and everybody has to chip in," Begin said. "It’s always fun to be a part of an intense game like that. We won the game so that’s the most important thing. That’s how we have to play every game and I think we brought it for a full 60 minutes tonight. We were ready for this match up tonight. That’s character and that’s what we need every night." 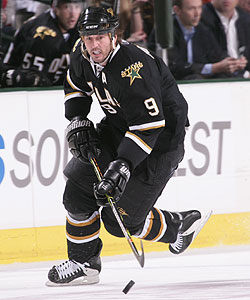 The Dallas Stars would then score again just three minutes later when Brendan Morrison deflected a Mike Modano shot for his first goal as a Star. Morrison and Modano were on the same line with James Neal, a combination that proved too much for the Hurricanes to handle. The line caused havoc all night with puck control and a chemistry that could pay dividends for the Stars moving forward.

"To get on the board tonight was nice, it’s a matter of consistency," Morrison said. "We wanted puck possession, because it just makes the game so much easier to play. We had a good team effort all around. They had us maybe bending a little bit the last 10 minutes but we didn’t break. We held on. Points are crucial."

"When new guys like that help the cause it endears them in the locker room," Tippett said. "This is going to be a tough month and the more guys we can get endeared the better, because we're going to need to stick together. Tonight our mindset was to stay with the game and when we get a chance to have an effect on the game, to have an effect."

Mike Modano responded to Tippett's public criticism after the Blues game with a strong game, flashing his speed and creating several scoring chances. His leadership will be crucial for the Stars moving forward.

"It was a huge win, because of the streak and because of where we are," said Modano. "We needed something."

The Stars also needed a strong comeback effort from Marty Turco, who was pulled against St. Louis in the first period after allowing three goals on eight shots. After the Stars allowed a shorthanded goal in the first period (which he had no chance on), Turco made a spectacular save on yet another shorthanded scoring chance when he stoned Matt Cullen with a glove save off a blistering wrist shot from the slot. A two goal deficit that early in the game would have been devastating to the Stars and Turco made that key save that helped keep them alive.

Turco then stood tall late in the second and all of the third when Carolina came alive and started blistering the net with shots. Despite allowing a power play goal late in the third, the Stars held on came away with a very important two points.

"We played well, they poured it on and we just pushed it enough tonight," Turco said. "Every night is a character game. One glimpse at the standings and you’re going to have to have your character every night."

Steve Begin, Dallas: For the first time since being traded from Montreal, Begin made his presence known as a Dallas Star. His tenacity and physical presence (seven hits) set the tone for the rest of the team that was desperate for any form of energy.

Eric Staal, Carolina: Created several scoring chances, including an incredible pass on Carolina's first goal. Was the Canes' best player in the game.

Brendan Morrison, Dallas: Finally looked comfortable as a Star and enjoyed great chemistry with Modano. His deflection for a goal in the second period held up as the game winner.