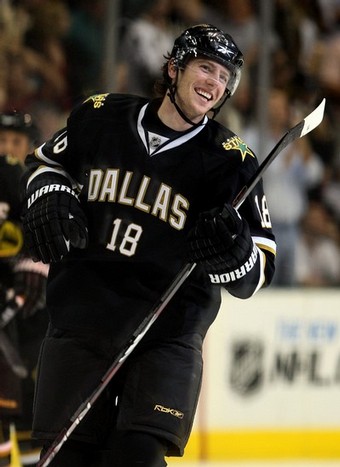 The Dallas Stars have historically been a team that is built upon a defensive mindset. The franchise has sought grinding and gritty veterans that emphasize two-way play and buy into the team atmosphere that has been successful for the Stars for so long. Rarely has a rookie been given the chance to have extended playing time throughout the season and it's extremely rare for a Dallas Stars player to stand out in the NHL as a top rookie in the NHL.

The Stars have had just two recent players breakout in their rookie years. In his first full season in the NHL Jamie Langenbrunner showed his playmaking abilities, notching 13 goals and 26 assists in 76 games. He quickly became a fan favorite and is best known for his goal from center ice in the playoffs against Detroit. Next came Brenden Morrow who became an immediate sensation in his first season, scoring 14 goals in 64 games. While not goal scoring machine, fans became enamored with his gritty play and penchant for causing havoc in front of the net. He was a fearless player in the trenches and his style of play helped him develop into one of the top leaders in the league.

By comparison in their rookie seasons Mike Modano and Neal Broten had 29 and 38 goals, respectively. But remember, those totals came in a different era of hockey and under a completely different team mentality. Morrow and Langenbrunner were breaking out for a team laden with savvy veterans in a scheme built around defensive play that discouraged wide-open offensive play.

Yet the Stars have changed the past few years. With the advent of the salary cap the Stars are unable to fill the team with big name veterans and are relying on younger players more than ever. The franchise has started to focus on building up their farm system and will count on prospects making a difference on the team not only now but in the future as well. The past few seasons the Stars have seen promising play by Jussi Jokinen, Antti Miettinen, B.J. Crombeen, Chris Conner and Toby Petersen. Yet none have had such a forceful impact as James Neal.

James Neal has separated himself from the pack of young Dallas Stars prospects and has become one of the breakout young players in the entire league. He is tied for the lead among rookies with 18 goals. With 10 points in his last eight games Neal has become more important to the team than just another rookie. His enthusiasm and physical play has inspired those around him and his classy persona fits perfectly with the Dallas Stars franchise. He has the ability to score from anywhere on the ice with a quick, hard shot and a knack for getting to loose pucks around the net. While not perfect in the defensive zone he has steadily improved over the season and is +9 over his past eight games.

Now the question becomes could James Neal become a finalist for the Calder Trophy? His name certainly should be put in the mix, especially since he has the chance to lead all rookies in goals scored by the end of the season. He has started to become more and more comfortable on the ice and has showcased some great plays the past few weeks. He has started to score important goals at big points in the game with two game-winning goals in the past five games. But how does he stack up when compared to the rest of the rookies around the NHL?

While Neal has had a great season and does lead rookies in goals scored, he is still a few spots down in most other statistical categories. When a team is having great defensive seasons and wins most of their games then most players on the ice will end up with pretty good numbers at the end of the season, especially in +/-. Yet Blake Wheeler's +32 rating is out of this world and leads all skaters in the league (the top three spots belong to Boston players, by the way). Kris Versteeg is also having a remarkable season, leading all rookies in total scoring and also has a phenomenal +/- rating. Patrik Berglund has proven to be an extremely important player for his team, leading rookies with a 3.15 BTN rating.

Yet the player who could top them all is breakout goaltender Steve Mason. Leading the league in shutouts, Mason has posted exceptional numbers this season while playing in 18 straight games at one point. There is a lot of hype surrounding the young goalie and that kind of talk can go far when it comes to voting for end of season awards. Unfortunately, Mason was placed on retroactive IR this weekend as he attempts to recover from mononucleosis. Sometimes players can come back and continue at where they left off yet most times it takes a few months to fully recover from the ailment. If Mason can recover and come anywhere close to the level of play he was at earlier in the season, it's his award to lose.

Right now James Neal would seem to be on the outside looking in when it comes to the Calder. But the fact that he is even in the conversation speaks volumes to how well he has played this season. The Stars have rarely had a rookie forward make a splash in the national media and lately Neal's play has put him in the spotlight. What the Stars need is for him to continue to improve and build upon the momentum he's gained the past few weeks.

For the Stars to have success in the postseason, they need to have big time contributions from up and down the lineup. To be able to count on a young rookie to make plays when needed is immeasurable in the playoffs. James Neal promises to continue to be a big piece for the Stars moving forward the season but more importantly he could be an even bigger piece of the puzzle for years to come.