Share All sharing options for: Marty Turco leads the Dallas Stars past Nashville in 4-1 win 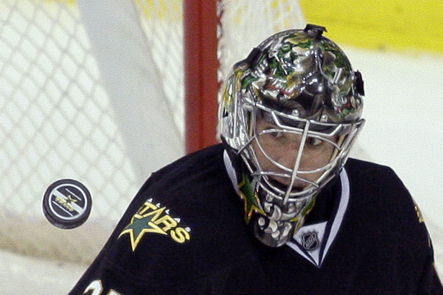 At times the Dallas Stars looked like a team playing it's third game in just under four days. After a disappointing loss in Colorado the Stars played a tight game against the NY Rangers before blowing it open in the third period, had a day off and then faced a hot Nashville team in a late afternoon game at American Airlines Center. With Marty Turco anchoring the team the Stars weathered a second period assault from Nashville before pulling away yet again in the third and winning 4-1.

It seemed as if things could turn ugly early on. Mike Modano was penalized with a double minor for high sticking and the Predators were poised to take control of the game in the first period. However, the Stars minimized any decent scoring chances Nashville tried to generate on the power play and then seized control when Brad Richards found Brian Sutherby on an odd man rush. Sutherby slipped his shot under Dan Ellis' pads and the Stars were up 1-0 while still on the penalty kill.

Mark Parrish then put the Stars up by two on a heads up play late in the first. James Neal snapped a quick wrister on net and everyone (except the referee) assumed Ellis had it covered under his pads.The Stars' quickly noticed the puck sitting just outside the goal line and Parrish beat Neal with a quick swipe of the stick to notch the goal.

The game became a bit hairy for the Stars in the second period. The Predators put a constant pressure on Turco and the Stars who seemed to deflate a bit as the game wore on. Perhaps the tiring schedule and a two goal lead put some lead in their wheels, but it was obvious that Nashville had the jump. Marty Turco was near brilliant as he played on of his most focused and efficient games of the season. Every move was calculated and not one motion wasted as he thwarted the Predators time and again.Jason Arnott put Nashville on the board when he and Jean-Pierre Dumont skated in on a two on one. A few nifty passes later Arnott was depositing the puck past a sprawling Turco.

The Stars were able to kill a late period penalty in the second period and survived long enough to head into the third period with a one goal lead, but not without a perfect opportunity to seize the momentum back from Nashville.  Steve Sullivan was given a double minor for high sticking Jere Lehtinen and the Stars kicked off the third period with four minutes of power play time to give themselves some breathing room. That opportunity was sugar-coated when Dan Ellis flipped the puck directly into the stands off the opening faceoff. Brad Richards scored on the ensuing two-man advantage and the Predators never recovered.

Steve Ott notched an empty-net goal and the Stars were able to jump back into 5th place in the West ahead of Anaheim. The Stars didn't play a perfect game, but took advantage of the chances they needed to in order to win the game. Marty Turco was outstanding as he came to his team's rescue when Dallas was looking lethargic in the middle frame. And the Stars won another gritty game as they continued their strong play since the All Star break.

It wasn't a pretty win but it's the kind of game you need to win as you work your way to the playoffs. The Stars have shown they can win in all sorts of different ways and that fact alone should give confidence to those wondering if this team can be successful down the stretch. Marty Turco is in his best form of the season and looks more energetic each game. The Stars are getting scoring from up and down the lineup and each player is at 100% every shift.

Marty Turco, Dallas: Held his ground when the onslaught erupted and helped his team fight through a lack of energy in the second period. Has a 1.63 GAA and is 7-1-0 in his last eight starts.

Jason Arnott, Nashville: Was a force all night long and would have had a hat trick if not for Turco.

Brad Richards, Dallas: A goal and an assist in a great all around effort. Made several key defensive plays on the penalty kill, including a beautiful pass on Sutherby's short handed goal.