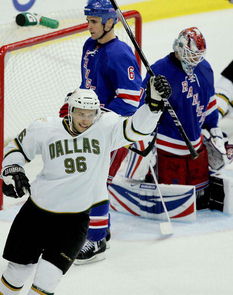 Well, I picked a heck of a game to miss. I was able to listen to the first period on Sirius and then watch the final eight minutes online. I don't think I will ever again experience the feeling of turning on a hockey and then watching your team rattle off six straight goals. That was absolutely incredible.

Since I wasn't able to really watch the game than I'm not going to write up my own recap. Instead, I'll give some thoughts on the game and then we'll see what others have to say about the game from around the league.

Game recaps and highlights after the jump..

But only 35 seconds later, Stars winger Brian Sutherby flew in wildly on the forecheck and poked a puck right off of the stick of Rangers center Scott Gomez and into the net to tie the score.

"I just thought that changed the entire game," defenseman Stephane Robidas said. "I think it showed the character of our team. We didn't get down, we got mad. We went down, we took control and we started playing the way we know we can."

"It was good to see everybody contribute and get a lot of goals, but to be honest our play was key tonight," said Ott, who also had two two assists. "We kept it simple and talked about keeping that push strong. We boosted up our power play percentage by scoring a lot of late goals there."

The Stars, who moved into fifth place in the Western Conference, were 4-9 on the power play in the game against the league's top ranked penalty kill. Three of them came in the third period with the Stars already ahead 6-2.

Mark Stepneski also has a rundown of the players with multiple points:

"Embarrassed is a strong word, but that’s where we are," Rangers center Scott Gomez said. "No one’s going to feel sorry for us. We got to pick it up and we know it."

One of the keys to the game was that the Stars connected for four goals on the power play against the Rangers’ penalty killing unit, which entered the day ranked first in the entire NHL.

"I think what we did was we shot the puck and we won the battles," Sydor noted. "Last night on our power play, we were missing passes, our attention to detail wasn’t there, they were winning the races to the pucks and tonight, we were. It was just work - it always comes down to hard work and attention to detail."

In his thoughts about last night's game Mark Stepneski notes how Fabian Brunnstrom was a bit hobbled late in the game.

Watch Brunnstrom on that last Neal goal, the 10th one, he gets a little tangled up. He was hobbling going off the ice but I don’t know how serious it is. I guess we’ll find out tomorrow if there’s anything to it.

Let's just hope it was something minor. It was good to see Brunnstrom get a few points in his return.

The New York Post has a rundown about the game, with a slightly different viewpoint on the rout.

"You can't be more disappointed than what happened tonight," Renney said.

With the clock winding down, the Stars had what amounted to target practice on Steve Valiquette, scoring on six of nine shots in the final period.

So, are the Rangers in an unending free-fall?

No one's giving up and no one's saying it's rock bottom," Scott Gomez said. "Embarrassed is a strong word but that's where we are."

Tim Cowlishaw gives us his requisite weekly column about the Stars, and talks about how Mike Ribeiro's improved play has been the key to the team's turnaround.

One of the reasons the Stars are climbing up the Western Conference ladder is that Ribeiro has played like an All-Star since missing the game.

Actually, it started with his first career hat trick at Florida, the Stars' last game before the break. It continued Friday night with his two-goal, two-assist performance in a crazy 10-2 victory over the New York Rangers at American Airlines Center.

But in a seven-game stretch starting in Florida, Ribeiro has five goals and seven assists and has taken the team scoring lead from Brad Richards. The Stars are 6-1 in those contests. It's no coincidence.

Brent Krahn is eager to prove himself as a capable backup for the Dallas Stars.

"I mean, what else are you going to do?" said the backup goalie who was called up by the Dallas Stars on Friday with the purpose of getting some playing time in the minors for regular backup goalie Tobias Stephan. "I feel as good as I have in years, I'm getting a chance to come up and be a part of a great organization, and I want to test myself and be the best I can be in whatever role they see me in."

I was thinking we could possible see Krahn during one of the two games this weekend, but after Turco spent half the game last night playing paddy-cake inside his net I'm guessing Tippett plays him again on Sunday.

Craig Custance of the The Sporting News and says the rumors about the Stars possibly trading Brad Richards are just that: rumors.

"He's really kind of endeared himself to our team," Tippett said. "He's a good leader and obviously a good player ... this is as good as we've seen him."

Finally, Larry Brooks of the New York Post says how the Rangers should expect see the return of Sean Avery late in February.

It can't come soon enough for a team that is in need of shock treatment to avert a complete breakdown in the wake of last night's colossally humiliating 10-2 defeat in Dallas that extended the losing streak to a season-high four games (0-3-1).