Another big win last night but the fight is far from over. Only six points separate the Dallas Stars and 12th place in the conference. If the Stars lose two in a row at any pint in the next month they could find themselves on the outside looking in all over again. It's unfortunate, but that's the position they have put themselves in thanks to a horrid first two months of the season.

The Stars face a critical part of the schedule coming up this weekend. They will play in Colorado tomorrow night then fly home to play the New York Rangers the next day on Friday. The Stars have Saturday off then play Nashville at 5:00 on Sunday. Last night the Flames were lethargic after making the trip from Colorado themselves and the only reason the game was close was due to Kiprosoff's brilliance. The Stars must find a way to keep the energy level up in this three game stretch.

The good news is that for the first time nearly all season the Stars are somewhat healthy (without Zubov and Morrow, of course). Fabian Brunnstrom, Mark Parrish and Doug Janik are all capable and healthy and should provide the team with an boost if and when they are called upon to step in over the next three games. Landon Wilson is close to returning but most likely will be kept out until next week.

The big question will be whether Marty Turco plays in all three games. The Stars will play seven games in the next 11 days and Dave Tippett must think about Turco's stamina going down the stretch. If it were up to me Tobias Stephan would play Friday night against the Rangers. The decision is made even tougher right now because of how well Turco has played the past five games. Sometimes though you have to bite the bullet and give your players some rest, no matter how much they think they don't need it.

Mark Stepneski gives us another glance at the "real" standings, where teams are ranked based on points percentage. The Stars don't move anywhere, but Anaheim drops a few notches. 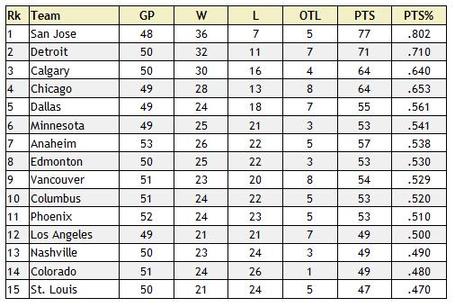 Much, much more after the jump.

Some quotes from last night's game:

We played pretty solid, we had contributions throughout the lineup and it was good to see our power play get some goals. Kiprusoff was very good but I liked the way we stayed with it. We are playing well without the puck and we are doing the things that allow us to win. Our special teams have been good, Marty has been excellent and we are doing things right as a team.

On James Neal's hustle to create the play on the final goal:

Everybody was expecting him to go down the wall, but he was smart. He was putting that puck there for a reason.

We're starting to shoot the puck and look for guys' sticks up front and that's what you've got to do to score goals.

On his game-winning goal:

Just a quick shot by Richie and a little deflection and it stuck right there in the crease, and I managed to get a stick on it there.

We’re at home here for awhile and we’re starting to put points together and wins together and its fun to be around the rink right now. Stuff’s starting to roll for us, we’re playing good hockey and guys are stepping up and everyone’s going. It makes things easier and you keep going.

Neal made a good play chasing down the icing and fortunately, I had time to wait the goalie out. Neal made a nice play and it was a good time to get a goal.

It was a tight game and it was ugly at times. We knew we just had to wait it out and wait for our chance, and it finally came. They’re a straight-forward team. We knew both teams were going to play like that. Both goalies played well. I think as a team we’ve come together here in the last month.

James Neal was a guest on The Ticket's post-game show. Andrew's Dallas Stars Page has the audio here.

The Calgary Sun has an article up about Steve Ott's agitating ability and how his offense is catching up to his mouth.

Oh, I'm just trying to bring a quarter of what he brings on a nightly basis," Ott said of comparisons to the Stars captain who'll miss most of the season with a knee injury.

"You want to contribute on a nightly basis. Playing alongside Mike Ribeiro and Jere Lehtinen -- two of the best players on our team -- you'd better or you won't play there.

In the WTF department, Spector's Hockey has passed along that a Montreal based French language news source is reporting that the Canadiens are interested in trading for Brad Richards and Matt Niskanen.

I don't see that happening.

In other trade news, TSN has launched the TradeCentre09 page. It's fairly thin right now but be sure to check it out daily to keep up with all the trade rumors that are sure to start flying soon. The trade deadline is on March 4th. Here is what TSN has to say about Tomad Kaberle, a potential target for the Stars.

Team: Toronto Maple Leafs
Position: Defence
Age: 30
Contract Status: Signed for two more years at $4.25M per season
Notes: Kaberle hinted to reporters last month that he may consider waiving his no-trade clause if general manager Brian Burke approached him with a possible deal. While Burke hasn't done that, Kaberle's name appears to be in play.

Mike Heika has an article up detailing Mark Parrish and Fabian Brunnstrom's bid to return to a lineup that has won five straight.

Parrish said it's difficult to walk the line between trying to impress the coaches and relaxing and playing his game.

"You just have to have confidence in what you've done in your career and show up and prove to them you can still do that," he said. "You have to relax and be intense at the same time, and that's a little tough, but it is what it is.

"You can't be too tight or think you have to score a goal on your first shift, or you'll be gripping your stick too tight and you won't be able to score. But you still have to be intense and work hard every shift and show them that you deserve to be in the game."

Razor has a great blog entry up about how incredulous he is that he and Ralph Strangis were picked as the Stars' dynamic duo.

Dallas Stars.com has the next installment up detailing the Stars' magical season in 1999 on their way to winning the Stanley Cup.