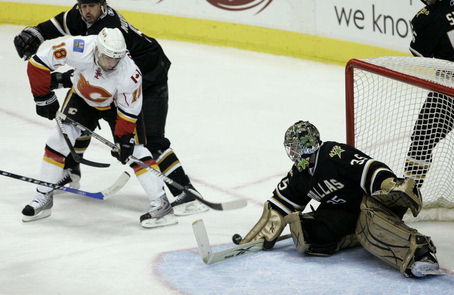 Over the years Dallas Stars fans have become accustomed to a certain brand of hockey. One where the home team plays solid, disciplined defense and uses a patient offense to dispatch another good team at home. On Tuesday night the Stars played their old game to perfection as they shut down the talented yet frustrated Calgary Flames 3-1.

The Stars went down a goal  early in the first period when Calgary scored on a power play goal by Mike Cammalleri. Steve Ott was knocked off the puck on the boards and Jarome Iginla snapped a shot on net. Marty Turco made several great saves in the ensuing scrum in front of the net but Cammalleri finished the play off with a patient top shelf shot. It was a rare defensive breakdown for the Stars in the game and while the Flames were able to take advantage and go up early, there was no doubt that this resurgent Dallas Stars team would fight back.

With Todd Bertuzzi in the penalty box the Stars evened the score off a nifty deflection by Jere Lehtinen in the final minute of the first period. The goal propelled the Stars into the second period and the team came out determined to put the game out of reach as early as possible. On the power play once again James Neal knocked down a Brad Richards shot in front of the net and deftly knocked in the loose puck. After getting just one point in eight games, Neal now has six points in his last three.

After the James Neal goal it became the Miikka Kiprusoff and Marty Turco show. Both goalies put on a display of near-perfect goaltending in the second and third period. While the Flames had their chances on a few power play opportunities the Stars and Turco never allowed them any prime scoring opportunities after going up a goal. The Stars maintained the pressure on Calgary, putting 21 shots on net in the final two periods but Kiprosoff held his ground. It wasn't until late in the third period that Dallas finally iced the game with a highlight reel goal by Brad Richards, off a great pass by James Neal.

In the past few months the Stars had a habit of allowing teams to tie or win the game in the third period after playing decently in the first two frames. At the same time, Calgary is known as a team that grossly outscores the opposition in the third period and has come back on numerous occasions after being down early. Lately, the Stars have found a way to shut teams down and not only hold onto the lead but build on it as well. It's been a full circle ride this season that's for sure.

The Stars have catapulted themselves up the standings the past month. The now sit alone in the sixth spot in the West, just two points behind fifth seed Anaheim. A five game winning streak will do magic on a team's points percentage and the Stars have set themselves up to be in prime position to make a strong run down the stretch to the playoffs.

While the new position in the standing is great, the winning streak has also had another effect on the team. The Dallas Stars' confidence as a team, once shattered as they questioned themselves and those around them, is now at an all time high. This team plays on the ice as one and every player contributes in a significant way. This confidence is the cornerstone for building success in the playoffs and beyond. The key is to not let the momentum swing the other way. While winning makes everything seem great, it's how you handle the losses that matter the most.

On this night however, the Dallas Stars are fine with just winning.

Miikka Kiprusoff, Calgary: Was brilliant for most of the night, making several spectacular saves that kept his team in the game in the second period.