Dallas Stars fall to the Blues 3-1 despite ferocious effort

Share All sharing options for: Dallas Stars fall to the Blues 3-1 despite ferocious effort 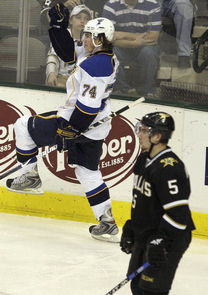 This, like the San Jose game on Monday night, was one of the most frustrating games to watch. For most of the game the Dallas Stars out-worked, out-hustled and out-played the St. Louis Blues, putting forth an incredible barrage of shots on net. Yet the Stars were unable to take advantage of a number of scoring chances and were stymied by Chris Mason and his best friends, the posts. The Blues scored twice in two minutes in the third period and went on to win 3-1.

The Stars played a high-tempo pressure game and spent most of the night in the offensive zone. At times the Stars had the Blues scrambling desperately yet were unable to finish on the chances afforded them. Their lone goal came on an incredible play by Mike Ribeiro in the first period, who circled several defenders before throwing a blind pass directly onto Jere Lehtinen's stick who promptly buried the puck in the net. the Stars had all the momentum building from there and had the Blues back on their heels. Yet Marty Turco committed one of his rare puck-handling follies and the Blues tied the game on an open net.

It was indicative of how the night would go. The Stars hit the post five times while trying to take the lead or tie the game. Overall, the Stars put 77 shots towards the net, with 42 being counted as shots on goal. This compared to just 38 total shots by the Blues with 22 on net.

What the Stars missed the most was a finishing presence in front of the net. The Stars were unable to get much penetration in front of the net and several times missed rebounds that were open to bury in the net. In games like these the loss of Brenden Morrow and Brad Richards is the most evident.

Most troubling on the night was how unsure of himself Marty Turco looked. He was far from crisp with the puck and at times was fighting off shots, allowing some egregious rebounds. The Stars were lucky the Blues missed two wide open nets in the second period. While the third, back breaking goal was far from Turco's fault the first two can be placed directly on his shoulders, especially the giveaway in the first period.

I wouldn't be surprised if we saw Tobias Stephan at some point this weekend, most likely against Pittsburgh on Sunday.

The good news is that the Stars basically stayed in the exact same spot in the standings. Both Anaheim and Edmonon lost last night so the Stars stay in the eighth spot in the Western conference, tied three other teams at 65 points. The game on Saturday against Anaheim becomes a huge game in the playoff race.

Notes and thoughts on the game:

Chris Mason, St. Louis: 41 of 42 saves and made several very tough saves through traffic. Was saved by the post on numerous occasions but any goalie will tell you that means the shooter had no where else to go with the puck.

Jay McKee, St. Louis: Had five blocked shots on the night, including several key blocks in the final minutes. Established a wall in front of the net and allowed no room for the Stars to maneuver around the crease.

Jere Lehtinen, Dallas: Was the Stars best player on the ice by far. Had several scoring chances, a few breakaways, a goal and hit two posts.