Don't forget that tonight Defending Big D will be participating in an SBN Hockey field trip. For the first period, we'll go over to St. Louis Game Time to join in on their game thread and enjoy some friendly trash talk with the opposition. Then they will join us for the second period. I'll have a game thread up directing everyone over to their site for the first period.

The Dallas Stars are looking to get back on track after losing two in a row to Chicago and San Jose. Midway through a six game home stand the Stars are 1-2-0 and are just 6-5-0 in the month of February. With Brad Richards and now Toby Petersen both gone for the next month due to injury the Stars will have to find a way to fill the holes and move on in the race for the playoffs. The Stars recalled Chris Conner and Tobias Stephan on Wednesday, and Conner should take his former spot on the line with James Neal and Mike Modano. Marty Turco is expected to make his 31st consecutive start tonight, extending his franchise record. 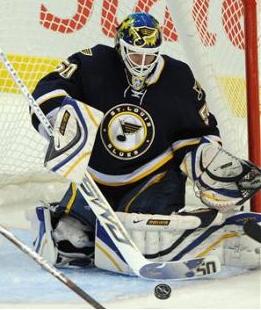 The Stars have scored just 11 goals in the last seven games, going 3-4-0 in that span. What was once a semi-comfortable hold on the fifth spot in the West has now turned into a fingernail's grasp of eigth spot. The Stars are in desperate need of a win tonight; a loss could put the team into a hole that would be tough to climb out of a second time.

For a team struggling to score goals, playing the St. Louis blues right now is a tough task. The Blues have allowed just nine goals in five games and are coming off a 2-1 win over the Nashville Predators on Tuesday. The Blues sit in 13th place, but are just five points behind the Stars. They have gotten points in 15 of their last 18 games and have started to gain momentum for a run up the standings. Facing the Stars will be goalie Chris Mason, who in his past 12 games has a 1.94 GAA and a lofty .939 save percentage. For a team struggling to put pucks in the net and dealing with injuries to some key centers, the Stars must find some way to give Marty Turco some scoring support.