Is Tobias Stephan the Dallas Stars' answer at backup goaltender?

Share All sharing options for: Is Tobias Stephan the Dallas Stars' answer at backup goaltender? 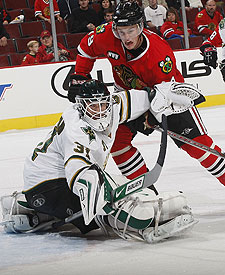 There are several burning questions the Dallas Stars must ask themselves as they head into the trade deadline. One of the most important decisions to make is what their plan is moving forward when it comes to the backup to Marty Turco.

A month ago the simple answer would have been that Tobias Stephan just isn't what the coaches and scouts thought he would be and the Stars were desperately in need of acquiring a veteran goaltender either through trade or the waiver wire. The Stars were inconsistent on defense and in goal and Marty Turco himself was struggling the most. Yet Stephan was unable to step up and be even a solid backup that allowed Turco the room to get his feet underneath when the season started.

In seven appearances Stephan had a 3.33 goals-against average and a .887 save percentage, yet just three of those games were starts. His last start came on December 13 in which he stopped 35 of 37 shots in a one goal loss. Yet the Stars' determined that Stephan was unreliable and with Turco regaining his form, chose to lean heavily on their all-star goalie. Marty Turco has now started 30 straight games, all the while with Stephan sitting stoicly on the bench.

It was speculated that that coaches and lost faith in Stephan and were reluctant to use him with the Stars fighting for position in the standings. With the trade deadline a few weeks around the corner and with what seemed like little chance for Stephan to start anytime soon, Dallas assigned him to the Bridgeport Sound Tigers of the AHL. The move was necessary to get the backup some playing time as well as to get a first hand look at another Stars goaltender, Brent Krahn. The assignment was also a means to determine just what the Stars should do moving forward at the backup; was Stephan just having as bad a start to the season as Turco and the numbers were a fluke, or was he the solid goalie the coaches thought he was?

In five games in the AHL, Stephan posted a 4-0-1 record, as well as a 1.97 GAA and .917 save percentage. It was a perfect confidence booster for the young goaltender and he returned to the Stars yesterday an invigorated hockey player, brimming with newfound enthusiasm and ready to face the rest of the season.

Perhaps now the Stars coaches will feel more open to starting Stephan and eventually giving Marty Turco a break. Although he has been playing his best hockey of the season the past few weeks, there's no doubt that Turco will need a rest at some point leading up to the playoffs. He has appeared in 56 of 59 games for the Stars this season and is on pace to play in more games that at any point in his career. If the Stars hope to make noise in the playoffs, a rested and fit Turco is their biggest weapon. The team needs to feel comfortable with starting their backup goaltender at any point in the season, even when every game is more important than the last. Perhaps with Stephan having success during his AHL stint the coaches will get to this point soon.

Tobias Stephan has all the tools to be a great goaltender in the NHL. He's tall, athletic and has great lateral movement. His ability to make acrobatic saves doesn't take away from the fact that he is also a very positionally and technically sound goaltender. He's put up decent numbers during his time in the AHL, (2.65 GAA, .910 Sv% in 2007-2008), and his time in the pipes for the Stars this season was no more inconsistent than Turco's (3.00 GAA, .898 Sv% in three starts).

So the Stars now have a decision to make. Do they stick with Stephan down the stretch or make a bid for one of the several veterans on the market, such as Manny Legace? Because while it is possible for the Stars to start Turco in every single remaining game this season, it would be in their best interest to have a backup goaltender with the ability and confidence to start at any time.

Tobias Stephan, with his time and success lately in the minors, has earned the right to fill that role for the Stars. Whether the Stars believe that, well that's the question at hand.